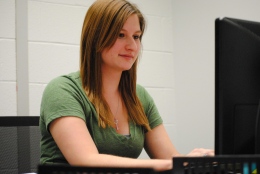 Someone dies from cardiovascular disease every 35 seconds.

“It’s really kind of shocking and staggering that even among all forms of cancer, cardiovascular disease is still the leading cause of death,” said Gina Berila, communications director at the Youngstown area’s American Heart Association branch.

On Saturday, from 10 a.m. to 2 p.m., 16 teams will compete in the Kick Start Your Heart Kickball Tournament in the Watson and Tressel Training Site. The teams include various student organizations.

Pavlichich said the event is free and open to the public. She also encourages an audience to attend.

“This is our first year, so things are still a little hectic, but anyone who is not playing is more than welcome to come and support,” she said.

“Heart disease also kills more women than all forms of cancer combined,” she said. “As an exercise science major, we learn all about how much of a problem cardiovascular disease is. However, many people are still uninformed.”

She said she hopes the kickball tournament will raise awareness of the disease.

“One of the ways to lower your chance of developing CVD is by being physically active,” Pavlichich said. “Playing kickball is a great way to get your heart rate up.”

A few teams are signed up from all corners of campus with the same goal of fighting the disease. The tentative teams include the American Chemical Society, Average Joes, University Scholars, SGA, Sigma Chi Fraternity, the Exercise Science Club and the Andrews Student Recreation and Wellness Center staff.

Berila said other annual events in Youngstown, such as the Heart Walk and golf outings, are great ways to put effort toward the cause.

“I believe kickball was chosen because it was a fun event that would raise a competitive edge between other organizations, such as fraternities,” Clement said. “We thought that it was an attractive offer and, at the same time, would help us raise money for the Heart Walk.”