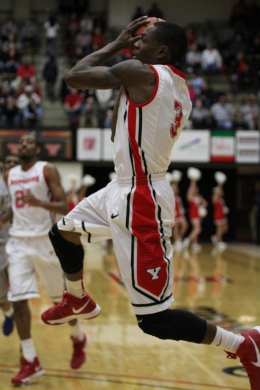 The Penguins lost 85-78 in Wednesday’s overtime loss to Kent State University at the Beeghly Center.

“We’re not playing good in big moments,” Slocum said. “This is a good basketball team that’s played a heck of a schedule. We’ve had our opportunities.”

Indeed they have, although they’ve often underperformed in crunch time. Having lost for straight games, Youngstown State University (3-4) has had its chances late in each of the defeats.

“Like I told our kids after the game, I feel like we’ve beaten ourselves in all of our losses,” Slocum said. “We’ve got to correct some things. There’s a lot of basketball to be played.”

The Penguins and the Golden Flashes played a back-and-forth affair, as there were 11 lead changes in the first four quarters.

With 38.9 seconds remaining in regulation, YSU had its best opportunity. Inbounding the ball to DJ Cole, he found Kendrick Perry slashing to basket. Perry put up a layup, missing off the left-rim.

Following the Perry miss, KSU’s Randal Holt attempted a 3-pointer at the buzzer. His shot missed and sent the game to overtime.

“We played good defense and I think for the most part we executed well for most of the game,” Perry said. “I think we have to work on finishing games.”

Controlling the extra period, the Golden Flashes were able to hold off YSU with solid defense and clutch free throws. KSU was 8-9 from the line in OT.

“They just made a couple more plays than us,” Perry said. “They got a couple offensive rebounds in some big moments that led to some baskets for them.”

Chris Evans led the Golden Flashes with 24 points and 10 rebounds. Also effective for KSU was Holt, finishing with 21 points and five 3-point shots.

For YSU, Perry was the leading scorer with 26 points, while Damian Eargle added 18 points and 10 rebounds.

While the Penguins losing streak has reached four in a row, Perry said there is “no concern.”

“The guys I play with, I wouldn’t trade for anything in the world,” he said. “Coach is doing well with his game plan. We’ve got guys in the right positions to score. I guess those shots just weren’t falling tonight.”