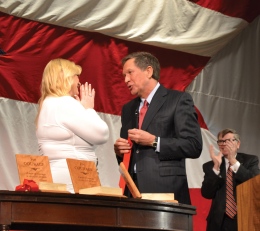 Governer Kasich awards his Courage Medal to Theresa Flores, after overcoming a life filled with the abuse, pain and exploitation associated with being a victum of human trafficking. Photo by Kacy Standohar/The Jambar.

After a hard few years in the labor market, Ohio is back open for business.

That’s the message Gov. John Kasich delivered at his State of the State address to a crowded auditorium at Wells Academy in Steubenville on Tuesday.

By moving the address out of the state house for the first time in its existence, Kasich used the venue change to tout the highest performing elementary school in the state in an area with an emerging energy market.

“Clean it and burn it,” Kasich said, in reference to the area’s booming coal businesses.

Kasich also addressed fracking, which was met with vocal opposition from members of the crowd.

“John Kasich is selling out Ohio,” shouted one protester.

Others joined her, and the handful in the balcony that interrupted the speech were quickly escorted out by members of the Department of Homeland Security.

Kasich said Ohioans should embrace natural and renewable energy resources, which, if done correctly, could decrease the state’s reliance on foreign oil.

Despite the protester’s concerns, Kasich voiced his opinion on the environmental impact of the shale boom.

For a speech applauding educational accomplishments, discussion of higher education initiatives was dainty, with no new initiatives being introduced. Kasich simply reiterated plans previously announced by Board of Regents Chancellor Jim Petro.

“Forty-one percent [of kids] graduating from K-12 are taking remedial math and English … when they get to college,” Kasich said. “It drives up the cost of college.”

The study also indicated higher drop out rates among students enrolled in remedial courses their first year of college.

In 2011, 38 percent of first-year YSU students didn’t return for their sophomore year.

He said he hopes universities will coordinate the establishment of new facilities and programs in the future to avoid competition with each other.

Gee addressed his aspirations for the plan in a release.

“By forging new partnerships … we have an unlimited potential to transform our state,” Gee said. “Ohio State is proud to be a committed partner in these efforts.”

State Sen. Joe Schiavoni (D-33) pointed out how the Board of Regents’ plan to increase the number of three-year degrees was absent. He criticized the cuts made at the expense of education.

“I realize that cuts need to be made, but you have to make cuts strategically,” Schiavoni said. “[But] cuts in education, I don’t think that’s the place to go.”

In the speech Kasich also proposed initiatives in the form of tackling human trafficking in Ohio, expanding and speeding up Ohio’s broadband network, reforming and investing in K-12 education and the rapid growth of Medicaid costs, which burdens the state’s budget.

He added that he feels coordinated care efforts can help alleviate the financial burden the program places on the state budget.

Kasich also heralded his JobsOhio bill, which he claims launched Ohio from 48th in the country in job creation to ninth. He also praised the work of his administration and congress for nearly closing the $8 billion budget deficit.

“In six months, we eliminated an $8 billion budget shortfall without a tax increase,” Kasich said. “In fact, we cut taxes by $300 million.”

For Youngstown, he reminded the crowd that unemployment rates have dropped roughly three points in the past year.

He credited V&M Star’s expansion and the General Motors Lordstown facility for being integral parts in the area’s growth.

Schiavoni was reluctant to applaud JobsOhio, waiting to see the long term effects of the legislation, but said he feels it was passed with good intentions.

“A lot of democrats will argue they don’t like the setup of JobsOhio. I hope we’ll see more jobs. I’m cheering for it. I don’t care if it’s democrat or republican,” he said.

Shortly after the speech, local democrats were quick to pounce.

“The effervescence of Gov. Kasich was pervasive throughout his speech,” State Sen. Capri Cafaro (D-32) said. “It seemed to be more retrospective of the last year than a prospective on what’s to come as far as policy initiatives.”

Schiavoni equated the speech to a “highlight reel of all the good things going on in Ohio,” but was reluctant to praise Kasich for anything substantial.

“I think he was overbroad. He didn’t give very specific plans for how the state’s going to move forward for all the grandiose ideas that he had,” Schiavoni said. He said that he felt Kasich’s examination of privatizing the Ohio turnpike was a bad idea, although Kasich still hasn’t made a decision as to what the state will do.

“I think the turnpike is an asset we need to keep,” Schiavoni said.

“I’ve been around since ’67, and that was one of the best State of the State addresses I’ve heard in that time,” William Batchelder, (R-69) Speaker of the House, said.

Batchelder praised the governor’s accomplishments with closing the budget deficit.

“It was monumental,” Batchelder said.

“I’ll tell you how the deficit was closed,” Sen. Nina Turner (D-25) said. “It was closed on the backs of local governments.”

Another one of Kasich’s underlying themes throughout the address was a spirit of bipartisanship in Columbus to accomplish the initiatives he introduced.

“I think you got to steer clear of mindless partisanship,” Kasich said. “They don’t give you awards for being partisan.”

Still, Schiavoni remained unconvinced based on prior unsuccessful attempts to work with Kasich.

“You couldn’t even get in his door,” Schiavoni said. “He always says come to him, but he never seems to work with you unless you vote for something that he’s in favor of. Then he thanks you for working with him. But it doesn’t go the other way.”

Schiavoni said he finds it problematic.

“I hope it’s something we can work on,” he said.

Cafaro, who was mentioned in his address as a leader in health care initiatives, said she remains skeptical, too.

“I certainly hope he puts his money where his mouth is,” Cafaro said.