Jerry Springer, former mayor of Cincinnati and well-known television personality, visited Youngstown State University on Thursday to discuss voter registration among college students, and urge them to become politically involved in the midterm election in November. 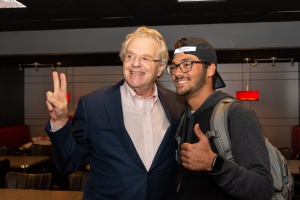 He said students have to get out to the polls and vote.

“One, think of the country, and two, think of self preservation. You’ve got to get out there and vote, or don’t be standing up in the seventh-inning stretch and singing ‘God Bless America,'” Springer said.

“Patriotism is making a commitment to having this country fulfill its dream and that means at least getting out and voting,” he added.