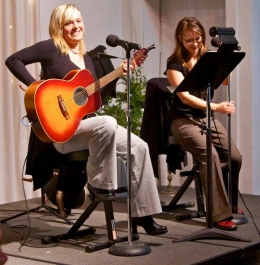 Drogowski has worked as Web editor and designer for Jenny, YSU’s online literary magazine, since its inception in fall 2010. He graduated in May with a bachelor’s degree in professional writing and editing and continues to contribute to Jenny in his minimal spare time.

Chris Lettera, president of the Student Literary Arts Association and editor-in-chief of Jenny, said dedication like this makes Jenny such a success.

“SLAA has 50 or 60 members working at any given time,” Lettera said. “At least 30 of those people are working on the staff for the magazine.”

The literary magazine focuses on poetry and prose, along with short pieces of fiction and nonfiction. Each issue features a visual artist.

“There’s so much local talent, and I think that any type of art, whether it be visual or written, needs to be showcased,” Lettera said.

Lettera added that making the magazine available online was a giant step for the publication.

“We wanted to reach as wide of an audience as possible, so we knew we needed it online,” he said. “With print, if you live in California or Beijing, you’d have a hard time walking into Kilcawley.”

First, staff members find a photographer or artist with an intriguing form of visual art to contribute. Drogowski said the

visual aspect is the most important part of the magazine because it draws in readers.

The second step entails selecting the material that will be used, which takes about a week following the deadline for submissions.

Lastly, the staff members read and lightly edit the stories they have compiled.

Saturday’s premiere featured acoustic artists Shiloh Hawkins and Courtney Waskin, as well as James Rhodes, a scholar from Manchester, England, who is working on publishing two books about Youngstown.

Lettera said Jenny is a reflection of Youngstown that portrays the weird, fun and sublime aspects of the city, and that’s exactly what the art displayed did.

“A lot of the paintings were very visceral, and that’s what we were looking for,” he said. “Gritty in content but enjoyable to look at.”

Jenny publishes two issues every academic year: one in November and one in April. On Saturday, those behind the magazine celebrated the publication of its third issue.

The premiere was held at Dorian Books.

“It ties in to the communal service that we’re trying to tap into, especially with the art community,” Lettera said.

In the spring semester, English instructor Chris Barzak will offer a literary publication course for students who want to write for Jenny and obtain professional experience working for a literary magazine.

Lettera and Drogowski agreed that Jenny is a great way to bring students and community members together.

Drogowski’s hope is that current college students will become interested in the magazine — and perhaps even fill his position.

“If you believe in what you’re doing, you do it,” Drogowski said. “It’s a lot of work, but it’s worth it for what we produce.”