Youngstown State University commuters and non-commuters alike gathered at the Hub in Kilcawley Center on Thursday for night of smoothie sipping and live entertainment.

Students were encouraged to wear their sleeping attire to the event, an idea that came from Residence Life Program coordinator Ahjah Johnson.

“The thought of a pajama-themed event just sounded like a good time,” Johnson said. “Pajama also kind of sounds like Jamba, and since there was free Jamba Juice, it just worked out.”

Megan Jones, a YSU student who works with Penguin Productions, found the performer for the event. She said after looking over a roster she had received, Noelle was a perfect match for the event both financially and in talent.

Noelle said she has never played at a campus prior to this show, and she had never played in Ohio prior to Thursday. On stage, she spoke about an odd characteristic of Ohio she had noticed: cheaply priced “pasta buckets.” 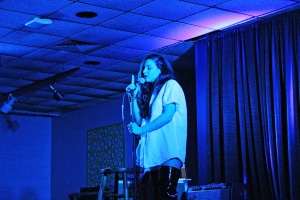 When Noelle received the invitation to play, she saw it as an opportunity to check off two life experiences with one show. The stage comfortably fit Noelle and her guitarist as she played her song “High for Me,” a single released Friday at midnight.

Other originals Noelle played at the show where “Made of Gold” and “Faking It.” She also blended her slow vocal-driven pop with the OutKast hit “Hey Ya!” Noelle said the songs she writes deal with issues women have within relationships and her direct lyrics make her message clear.

Jones said being a theater major has helped her realize events like these are important to YSU students for entertainment and to escape from the stresses of everyday schoolwork.

“School shouldn’t just be about studying constantly,” Jones said. “Students should get involved in events like this because it builds community, and a break from studying is good for retention.”

Although this show may have been for pop fans or others who were curious about who Noelle was, Jesko said Penguin Production events are for everyone. She said they try to book a wide variety of artists, so people can experience different musical genres and still enjoy their own favorite genres.

The next Penguin Production event will be Feb. 22 at the Lemon Grove in downtown Youngstown, one floor above The Federal restaurant.

Noelle’s next shows will be March 2, with artists Hippie Sabotage and Melvv at the House of Blues in Boston and on March 4, at the 9:30 Club in Washington, D.C.