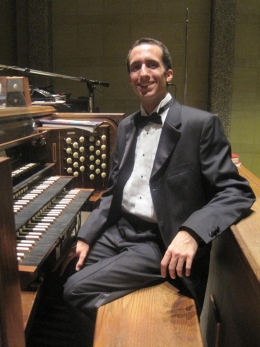 Ever wonder how many other students share the same major as you? In Craig Ziobert’s case, no one does.

Ziobert has been studying organ performance since 2008 and is the only student in this focus area. As a double major, he is also pursuing a religious studies degree.

A senior at Youngstown State University, Ziobert does much more than fly solo through his courses.

Commonly referred to as a “jack of all trades,” he is a modern-day Renaissance man. With numerous and varied interests, he said he makes time for each one.

Ziobert is the assistant organist at Our Lady of Mount Carmel Church, where he has played every Sunday since 2009.

He also has a passion for vocal music. Ziobert belongs to the university choir and the Saint Columba Cathedral Choir.

“Both are completely different,” he said. “Saint Columba is all church music, whereas choir is a mixture of the two.”

Ziobert said he loved being a part of the university choir’s special performances, including shows for 9/11 and Christmas.

In Ziobert’s favorite production, “Pop Series,” the choir gets a chance to break away from the usual classical singing to perform modern-day pop songs.

As another pastime, Ziobert blogs. He manages three websites, two that focus on weather.

“I realized I liked weather as a child,” he said. “I would always go outside and watch storms. I always wanted to be the one out there chasing the storms.”

The police escorted Ziobert off Virginia Beach in 2004 because of his fascination with Hurricane Alex.

“Everyone else was inside, and I was outside because I wanted to feel the water,” he said. “There were like 55-mile-per-hour winds.”

Ziobert said he plans to fulfill his childhood dream, without police escorts, of chasing storms in Kansas, Missouri and Oklahoma during tornado season in the spring.

William Buckler, associate professor of geography, said he saw Ziobert’s strong interest in meteorology and called him shortly after the course ended to see if he would be interested in assistant teaching.

Ziobert accepted the offer and has been an assistant teacher for the weather class and lab for two years.

“I enjoy interacting with the students and talking about weather,” he said. “You can’t really discuss weather with your friends without them getting bored.”

Ziobert’s main website focuses on Youngstown’s weather and is linked to his Twitter account. The other site focuses solely on tropical hurricane weather, and the link was attached to a CNN article during the recent hurricanes.

Ziobert said he plans to earn a master’s degree in meteorology. His hope is to have a full-time career in weather and a part-time job as a church director.

Students can also find Ziobert behind the customer service desk at the YSU Bookstore or selling merchandise while tailgating at YSU football games.

Ziobert said he plans to stay involved in each of his interests until his graduation in 2013.

“I have such a wide variety of interests, which has led me to become involved in so many different things,” he said.