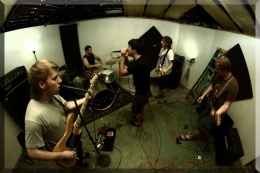 Members of Ohio- and Pennsylvania-based band Lights Camera Distractions are willing to put their lives on hold to reach their rock and roll dreams.

After forming in 2007 and going through several lineup changes, the band has settled down with five members who are now preparing to head back to the studio and play shows in Youngstown.

David Kohout and Andrew Brest, both students at Youngstown State University, may be a bit of a distance from the remainder of the band — Zach Kaikis, Johnny Davidson and Doug Izenas, who reside in Pennsylvania — but they said this doesn’t get in the way of their practices.

“When we do get together to practice, we don’t get bored of playing the same things, and we all usually come with a lot of ideas,” Kohout said.

He’s been in bands that would practice four times a week, and doing so became more like a job to him. That’s why the distance doesn’t bother him.

The latest lineup got together two years ago. In the summer of 2011, they traveled to Georgia to record with producer Lee Dias who has recorded with bands like From First to Last and Mayday Parade.

Although they’re proud of the album, Brest said they don’t push it much.

“We haven’t pushed it much because a lot of the songs were written before either of us were in the band, and our sound now is so different,” Brest said.

The band is finalizing details to record in Boston over the summer with producer Jay Mass, who has recorded with bands such as Transit, Tidal Fight and State Champs.

Tidal Fight is one of the band’s musical influences, along with Norma Jean, Taking Back Sunday, Anti-Flag and more.

“We always have a hard time explaining to people about our sound,” Kohout said. Members of Lights Camera Distractions said they’re excited to record new music this summer, primarily because they’ve established their sound as a five piece.

Their music has pop punk influence with a hint of heavy guitar.

Kohout and Brest said they hope to live comfortably by performing one day. But until then they are OK with funding their band.

“We’re usually always investing our own money. I don’t care, though, because it’s what I love to do,” Brest said.

Aside from gas prices, the band has put thousands of dollars into their tour van, which bit the dust in February.

Since they have been unable to tour, they’ve been writing for their new record and rehearsing for their first show in Youngstown, during which they’ll play new music.

“I’m more excited for people to hear the new stuff,” Kohout said. “The new set of songs are going to be who we really are.”

Members said they realize it’s now or never to go for the big time.

“My whole life, since I can remember, I’ve wanted to do music,” Brest said.

He said whenever he gets positive feedback from a fan, it shocks him.

“On tour, we’ve had people buy our merch and then want us to autograph it. I’m like, ‘We’re nobody. Why do you want my autograph? It’s just going to ruin the shirt,’” Brest said.