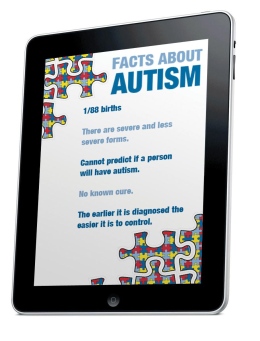 Kyle White, a Youngstown native, grew up watching his aunt struggle to raise her son with autism.

He said people would often give looks him in the grocery store when his cousin had an episode. “People around just didn’t understand that this was the only way he had to communicate what he wanted,” White said.

White recently teamed up with Jimmy Westerfield, his high school friend and a Youngstown State University student, to host the iPads for Autism fundraiser; all proceeds benefit the Rich Center for Autism.

Westerfield, a junior, approached Tricia Perry, event coordinator for the Rich Center, and said he wanted to do this fundraiser. She said she was more than happy to help.

“We didn’t look for it; he came to us, which is a blessing,” Perry said. She said the Rich Center is primarily funded through donations and fundraisers. Students receive a $20,000 Ohio Autism Scholarship, but Perry said it takes double that amount for them to serve the students.

“It’s wonderful that the community recognizes autism and comes to us wanting to help us serve these kids,” Perry said.

Westerfield has promoted events for Entourage Night Club, Pal Joey’s and 9ine Lounge and wanted to host a fundraiser. He got the idea while watching a “60 Minutes” special on how those with autism communicate effectively with an iPad.

“These kids, once they see an iPad, their eyes just light up because they see this big screen,” Westerfield said.

In the “60 Minutes” special, they showed how those with autism used the iPad’s touch screen — instead of flash cards or cut-up bits of paper — to communicate.

White said his cousin uses an iPad to communicate and that he has seen growth in him ever since.

“I got to see my cousin grow up with autism, and the iPad has just given a voice to these kids who really had no way of communicating before,” White said. “Now, instead of screaming in the store, he can use the iPad.”

Perry said children with autism often do not have a language. They like to use iPads at the Rich Center to communicate, and the students respond well to them.

“Before, we would use pictures the kids could point at to let us know if they need to use the bathroom or if they wanted to go outside,” Perry said. White and Westerfield wanted to combine their passion for promoting and do it all for a good cause.

“We couldn’t think of a better organization,” White said.

He said even though he goes to school at Washington and Jefferson College in Pennsylvania, his heart is with Youngstown.

The two called upon friends and fellow students to perform at the fundraiser, including Killa Karz, KeilyN, SirRokk, The Bad Apples, Veronica Skowron and Ralph Rich.

IPads for Autism is taking place at Happy Hour Bar and Grill in Boardman on Saturday.

There is a cover charge of $5 with 100 percent of the proceeds being donated to the Rich Center to buy iPads for its students. Westerfield is a bartender at Happy Hour, and he will also donate all of his tip money from the fundraiser.