Youngstown State University professors will lend their musical expertise to the world debut of the Dana Piano Quartet on Sunday at 7 p.m.

The ensemble is part of the Romantic Masterpieces recital being performed in the Ford Family Recital Hall at DeYor Performing Arts Center. YSU piano professor Cicilia Yudha said the goal of the ensemble is to be a truly professional performing piano quartet. 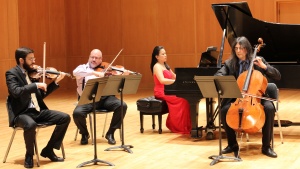 “We will represent YSU Dana School of Music nationally and internationally,” Yudha said.

All four members of the ensemble were happy to arrive at the decision to perform Johannes Brahms’ piece, Yudha said.

“It is one of the most beloved masterpieces in chamber music literature,” Yudha said.

Yudha maintains a prolific solo and chamber music career as well as her work in the classroom. She recently released a debut solo CD and teaches master classes both in Youngstown and abroad.

Part of the inspiration for the quartet came from the new addition to the faculty, Cahn-Lipman, who is starting his first year as cello professor at YSU.

“There was talk of there being a faculty piano quartet when I was still in the interview phase last spring,” Cahn-Lipman said. “We finally had a critical mass of string players here with a pianist to put together a chamber group.”

Cahn-Lipman has enjoyed his time teaching and looks forward to growing the department’s cello studio. He received his doctorate from the University of Cincinnati and has performed frequently at Carnegie Hall and Lincoln Center as a chamber musician.

The four esteemed performers will be combining their instruments’ unique voices to present the piece, Yudha said.

“Great chamber music is a perfect marriage between the mixed instruments,” Yudha said.

Yudha said passages are exchanged between instruments and sometimes shared in equal partnership.

The string coordinator and professor at YSU, Kromholz, will provide the violin portion of the quartet. He is a concertmaster of the Youngstown Symphony Orchestra as well as several active musical roles beyond the classroom.

“I have dreamed of having a professional chamber music group with faculty as part of the Dana School of Music’s environment,” Kromholz said, “and I know that’s been a vision shared by each of the other faculty members in this quartet.”

The violist, Strauss, was a principal violist at Indianapolis Symphony Orchestra for 20 years and has recently made a recording release of “Wordless Verses,” a collection of trio works inspired by the writings of Nikolaus Lenau and Edgar Allen Poe.

The first half of the “Romantic Masterpieces” recital is the Dana Chamber Orchestra’s program. The un-conducted ensemble will perform Edvard Grieg’s “Holberg Suite” and Edward Elgar’s “Serenade for Strings.”

The Chamber Orchestra is comprised of select performance majors, music education majors and some performance masters from the department. They will precede the Piano Quartet on Sunday’s recital.

Dean of the College of Creative Arts and Communication Phyllis Paul has been supportive of programs that aim to grow the department like the chamber orchestra and the newly formed quartet.

“It’s been Dean Phyllis Paul’s vision and energy that’s made that possible against so many other competing demands for our time,” Kromholz said.