The International Programs Office (IPO) announced the opening of an international student lounge, The Lariccia Cultural Collaboratory, on the first floor of Jones Hall.

Nathan Myers, associate provost of IPO, said the idea of having a space for cultural programing had been discussed for a few years among himself and other faculty, including former Vice President of Multicultural Affairs Sylvia Imler.

Myers explained the needs of a space for cultural events such as International Coffee Hour, club meetings and other gatherings. The lounge will be open during the office hours of IPO.

“This is totally a ga 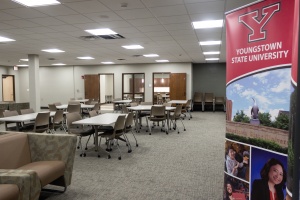 me changer for our international students,” Myers said.

Mohamed said he is excited about bringing more community members and international students together by having an open cultural space.

“A lot of [community members] like to help the international students and attend the events,” he said.

Mohamed said international students will benefit from having friends from the community to help with resources such as jobs and advice.

Marilyn Johnson said she has been actively involved in YSU cultural events for four years.

She said she is involved with coffee hour and is happy to hear it will be hosted in the international lounge.

Rachel Mientkiewicz, a senior majoring in biology and psychology, is the chair of iPals at YSU.

She said she is excited about the new lounge.

“[The lounge will be] a great space for just hanging out and it’ll give international students and organizations a central location to operate from,” she said.

“Since Jones Hall is where the International Programs Office is at, I think it’ll help bring the international student together with domestic students, just by having increased traffic through there,” she said.

“Knowing about other cultures adds color to your life and your experiences,” she said.

The first event at the lounge will be Sept. 2, which will be open to community members and students.