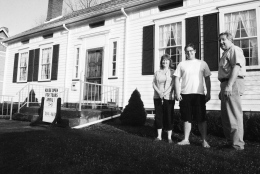 Chris Klingemier (right) stands outside of the John Stark Edwards House and Museum in Warren alongside assistants Cindee Mines and Ben Winings on Wednesday. Photo by Shannon Watson/The Jambar.

The John Stark Edwards House and Museum in Warren was taken off the National Register of Historic Places in the 1980s. Now, a part-time Youngstown State University history instructor, with the help of a few students, is trying to secure the house’s future by getting it back on the list.

“If a building is on the list, it essentially is provided protection,” said Chris Klingemier. “It would protect it, for example, from demolition if the federal government would want to put in a highway.”

Restoration was a childhood fascination and later a hobby for Klingemier, who spearheads the movement to save the Edwards House.

As he finishes his thesis in historical preservation, the Edwards House has become his main focus.

With the help of graduate students Ben Winings and Isabel Seavey, Klingemier plans to nominate the Edwards House for the historical registry.

“It’s tricky trying to get back on the list,” Klingemier said. “We need to look at the when and why during the period of the house’s significance.”

In 1807, John Edwards built the first wing of what would eventually become a large house. The wing was one room deep and three rooms wide.

In the 1930s, President Franklin D. Roosevelt’s New Deal created the Historic American Buildings Survey, or the HABS. The program, which created jobs for jobless architects, draftsmen and photographers during the Great Depression, involved documentation of the country’s architectural heritage.

“The Edwards House’s significant period was in the ‘30s when the HABS decided to turn it into the museum,” Klingemier said. “The house was restored by the then newly formed Trumbull Historic Society and later came to be the museum that is still open today.”

The house was moved in the 1980s due to expansion of the Warren Tribune Chronicle.

“When a historic site is moved, it loses part of the information that comes with it,” Klingemier said. “That was when it was taken off the list because the site no longer was important.”

Klingemier’s analysis of the Edwards House looks at how the structure was constructed and investigates the significance of the time in which it was built.

“What we know is that the building has been an ongoing process of understanding it,” Klingemier said. “We have to get inside the heads of the builders.”

The Mahoning Valley is unique because of immigration; immigrants stayed in the area long enough to leave their house types,

Klingemier said. “A house type is how a house looks and is constructed, and commonly comes from the same region of the world.”

Even as Klingemier works to get the site back on the list, a date has not yet been set as to when the nomination will be complete. He said the most difficult part is finding the scholarship that goes along with the house.

“The first 120 years is the easy part,” Klingemier said. “The lack of documentation from the architectural point of view on what is going on in the ‘30s will be the most difficult.”

Klingemier said a great deal of research must be conducted.

“We need to find the people that know the sources that already know what was going on in the 1930s surrounding that period of architecture and the house itself,” Klingemier said.

The house is still available for tours during the weekend and by appointment.