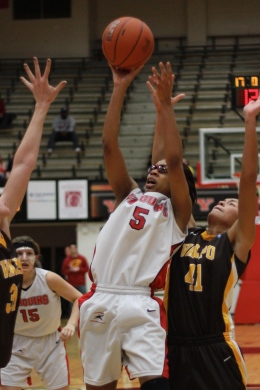 During halftime of Thursday night’s game against Valparaiso University, Youngstown State University head coach Bob Boldon gave his team a much-needed speech that helped drive the Penguins to a 64-58 win at the Beeghly Center.

“Definitely there was some words that we heard that motivated us,” said junior forward Brandi Brown in the postgame press conference.

Boldon did not say what he preached, but jokingly said he is going to give up swearing for Lent.

“There’s no secret that I was a little bit frustrated tonight, but I thought they really did hang in there,” Boldon said.

Brown took over in the second half, knowing she had to be the leader.

“Sometimes I do take it upon myself to work harder,” Brown said in the post game press conference. “If I work hard, then the rest of the team has to work hard. I think it’s all about holding each other accountable.”

Brown finished with game-highs in points (20) and rebounds (10), tallying her eighth double-double of the season and 35th overall.

Brown hit her second and last 3-point field goal with 1:54 remaining in the game and put her team up by three, 58-55.

The Penguins allowed three points the rest of the way and were led by senior guard Kenya Middlebrooks with six clutch free throws.

Boldon said that he would not want anybody else at the line.

“Ken’s been fantastic all year,” Boldon said. “She did it in Akron. She did it again tonight. She’s been phenomenal for us down the stretch at the line.”

Both teams struggled in the first half with the Penguins on top, 21-20, at halftime. The Penguins shot 39.1 percent from the field and 8.3 beyond the 3-point line.

The Crusaders shot 32.1 percent from the field and went 0-3 from beyond the arc. Boldon said the Penguins had mental breakdowns and did not come out with energy.

“It’s not the records; it’s the breakdowns,” Boldon said. “The mental breakdowns frustrate me because we had three days to prepare for them.”

Boldon added that focus and energy were up in the second half.

“I thought we played pretty good basketball at times tonight, but I don’t know if we had the right mental approach for 40 minutes like we had the last couple of days,” he said.

Boldon and Brown said they would take the victory but are not satisfied.

“A win is a win, but we have to play better defensively and offensively,” Brown said. “We have a lot to work on.”

Boldon said the Penguins are showing signs of improvement every game.

“I think we’re getting better, and sometimes it’s hard to believe,” Boldon said. “These next two weeks are the hardest times because you’re kind of in the middle.”

The Penguins remain at home and face Butler University on Saturday.