Two departments at Youngstown State University continue to manage without administrative assistance after a recent request for a new hire was denied.

The Department of Philosophy and Religious Studies has been without administrative assistance for seven months due to budget cuts. Alan Tomhave, department chair, said this has been detrimental to the department. 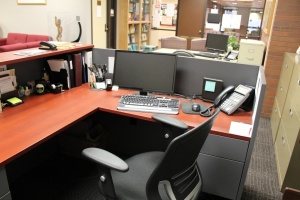 “An administrative assistant does a lot of different tasks that help make the job of the faculty easier,” Tomhave said.

Administrative assistants perform tasks from making textbook orders and printing off exams to bridging contact between students and faculty. Tomhave said these tasks are now piled on the faculty, in addition to their academic responsibilities.

“They’ve been pretty good about understanding that that’s necessary, but they’ve also been frustrated a little bit too because it’s an extra piece,” Tomhave said. “It’s not the thing that they’re experts in.”

“It’s really disheartening for students to come in and see a department with the lights off where no one’s there to answer questions,” Jerryson said. “I’ve had people come in while I’m in my office and go, ‘Hello? Who’s there?’… What does this signal to the students? Is YSU vibrant or is it no longer fully operational?”

The Department of Foreign Languages has been without administrative assistance since May 2015. A request was sent to Provost Martin Abraham to hire a full-time staff member to be divided between the two departments, which was denied last week.

Abraham said the decision was made because YSU has a limited budget and there are other areas of the university that are also requesting more staff or funding.

“We are doing our best to invest in those opportunities that provide the greatest return for the greatest number of students, while also being cognizant of critical academic needs,” he said.

The faculty union filed a grievance against the administration in regards to the situation. Gabriel Palmer-Fernandez, philosophy professor, said the ruling stated that absent administrative assistants’ functions should be done by the department chair.

“The problem with that is those functions belong to the ACE union employees,” Palmer-Fernandez said. “It is pretty much a standard thing that these are the things [ACE employees] do, [non-union members] don’t come and do them.”

The secretarial position was vacated in the Department of Philosophy and Religious Studies last July, when previous secretary Mary Dillingham was transferred to Career Services.

“We also received well over several hundred thousand dollars from philosophy circle members who left scholarships as a legacy,” Waller said. “The reason we’re able to do that, the reason that worked, was because we had somebody who knew everybody.”

The Shipka Speakers Series is one of the largest lecture series on campus. Jerryson said attendance was down one-third this year because it was planned the same day as the Bernie Sanders rally.

“I think partly that wouldn’t have happened if Mary helped with logistics, but that aside, a lot of people didn’t show up because Mary wasn’t there,” Jerryson said.

The lack of administrative assistance turns students away, Waller said.

“If you have a really dedicated, intelligent secretary or administrative assistant who runs these things, they are the life and blood of a department,” Waller said. “You cherish them and everyone knows how much they contribute.”

The department has one student assistant to fill the gap and is hoping to hire another. Palmer-Fernandez said there are still limitations.

“She can’t go into your private records … or ask the administrative assistant to do a course change form,” Palm-Fernandez said.

Kristine Blair, dean of the College of Liberal Arts and Social Sciences, is planning to meet with faculty, the Association of Classified Employees, Human Resources and the Ohio Education Association over the next few months to standardize duties of all positions in the college.

Tomhave said the conversations are ongoing, and hopes the vacancy will be filled in the future.

“The dean understands the need for making sure those tasks get done,” he said.