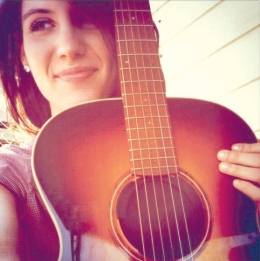 Katianne Timko dances to the beat of her own drum. Although she’s from an athletic family, she had zero interest in sports and said she doesn’t even know how to sweat.

When she was young, Timko was obsessed with the Spice Girls.

“I sang my brains out all day, every day until finally my mom signed me up for voice lessons,” she said. “I was definitely that kid who ran around singing all of the Spice Girls’ songs, and it was cool of my mom to recognize that singing could become the one thing I could identify with.”

Timko began participating in community theater when she was 9 years old. She’s now writing songs and performing at local venues, aspiring to be like her biggest inspiration: Alanis Morissette.

She enjoyed participating in plays but said she eventually wanted to express herself more.

“I write to help make sense out of the crazy situations I get myself into, and I have amazing, talented friends who think that I’m amazing and talented,” Timko said.

Timko is a junior studying telecommunications at Youngstown State University. However, she is beginning to lose interest in her major because of her love for music.

She has only been performing her music publicly for about a year.

“I’m on a good path and feel lucky to have so many people like what I do and believe in me, even though they don’t have to,” she said.

Timko said she knows bands and artists who have a hard time booking shows, but she has actually turned some down.

“I’d hate to sound like I’m bragging. … It’s actually unbelievably humbling,” Timko said. “Youngstown wants to give me a chance, and that’s cool to me.”

Timko began practicing with her friends in the alt-country Robbie Jay Band while working as a sales representative at Hubbard Music.

“She is the kind of person some people want to be but don’t have the guts to be,” he said. “With her, you get what you get.”

Timko said the Robbie Jay Band’s members took her under their wing. She opened up for the band.

“My first gig was this time last year. I was so nervous,” Timko said. “The first time, I sat and sang and had someone play the guitar for me.”

Timko then began regularly practicing guitar, some nights until 4 a.m.

“If I could pay my bills playing my music, I would be beyond thrilled because I could spend more time with it,” she said. “It’s kind of wired into my DNA that making music is where my heart is.”

“I’ve missed out on some fun nights to stay in and write,” she said. “But aside from that, my music betters my life. It doesn’t take anything away from it.”

Timko said she writes what’s on her mind.

“I have a full notebook of ideas, but I know I won’t use all of them,” she said. “The more I write, the better I get.”

As of late, Timko said she feels more confident and creative.

“I mostly write acoustic emo-girl music,” she said. “I’m starting to go into more of a blues realm.”

Timko has performed at local venues like the Lemon Grove Cafe, Cedars Lounge and Barley’s.

She loves to perform in Youngstown but wants to start branching out. She began recording her EP on Friday at Ampreon Recorder, a sound studio in Youngstown.

“It will be kind of a glorified acoustic demo with piano, banjo and violin,” she said.

“I get a little jittery and scatterbrained, but now I’ve kind of wrapped my head around what I’m doing,” Timko said.

She opens up for New York City-based singer and songwriter Jann Klose on Nov. 11 at 7 p.m. at the Lemon Grove Cafe.

Timko said she finds solace in her friends and role models, and two of them even inspired her to get a tattoo on her arm.

“Dave Grohl has a feather tattoo, and I decided to get a girlier version of it that still channels Grohl’s,” she said. “Inside the feather, it says, ‘That I would be good,’ which is an Alanis Morissette song. I’ll probably never be as good or as smart as her … but if I saw her perform live, I would weep.”

Timko added that her tattoo contributes to her rebellious stage, which offset her original hopes of working in telecommunications.

Monica Smith, a friend of Timko’s, said she is proud.

“I was the lucky one who listened to her sing and teach herself guitar every single day,” Smith said. “I was at her very first gig, and she’s worked so hard and come such a long way from then. She’s so passionate about what she does.”

McFarland said Timko is easy to like, especially as a performer.

“I always thought once she got on stage, you couldn’t help but like her,” he said. “I’m glad to frequently share the stage with her and call her one of my dearest friends.”