An educational magic and hypnosis show illustrated the consequences of making bad life choices during Alcohol Awareness Week in the Chestnut Room of Kilcawley on Sept. 26.

This event was sponsored by Youngstown State University Housing and Residence Life. Robert Hackenson Jr., a professional speaker and “edutainer,” was the magician. Hackenson began performing at high schools and colleges in 2004 working for Dynamic Influence, the company he founded.

Hackenson performed magic and hypnosis acts that were infused with lectures about excessive alcohol use, drug use and other dangerous behaviors. He said it’s easier to keep an audience engaged when there’s a fun element to the lecture.

“It can be the best content ever, but if you’re standing behind a podium and delivering it, people aren’t paying attention,” Hackenson said. “So I make it my mission to deliver highly interactive presentations and magic with a message.”

He performed magic tricks where, for example, he would predict which color chip somebody would pick by saying things to influence their decision. These tricks were meant to illustrate to students how the power of influence and perception can affect the decisions people make.

“Sometimes we get caught up in the moment. You see other people, sometimes you have the people that say yeah do that,” Hackenson said. “They don’t care about you. They are trying to entertain themselves at your expense.”

During the presentation, Hackenson told students how the use of drunken social media can impact their sober lives. In order to help the audience understand the consequences, he used hypnosis to help them visualize it.

Hackenson used general hypnosis techniques to make students believe they were a part of different scenarios that can be caused by being under the influence, like getting a DUI or going to jail. 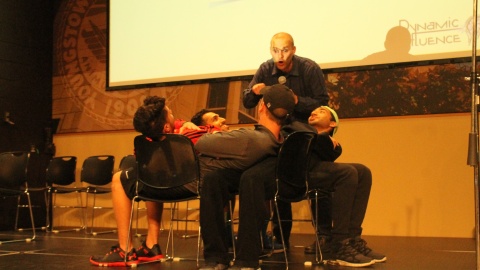 Although the event was for Alcohol Awareness Week, Hackenson didn’t limit the presentation to excessive alcohol use. He talked about other bad habits that affect some college students like smoking marijuana and abusing prescription pills.

“Before you just act on things, take that step back, and think about what you want. Always weigh out risk versus reward,” Hackenson said.

“The idea of this is don’t drink, but I think it’s important to focus on the binge drinking, and where the consequence come into play with it,” Borowske said.

Emile Boulos, a computer science student, said he liked how the magician used entertainment to educate the crowd of students.

Hackenson said the most rewarding part of his job is that he gets to make a positive impact on others through fun education. 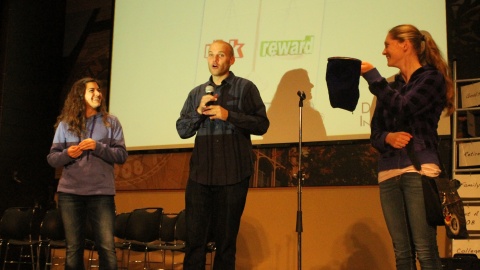 “There might be people in this audience that might be something they are dealing with. Hopefully it gives a different perspective,” Hackenson said. “Using magic with a purpose is very rewarding for myself, and hope it has a positive impact.”