The Alternative food truck, a staple of Youngstown State University cuisine, has been notably absent from its usual post on Lincoln Ave.

Greg Saunders, the owner of The Alternative, previously served YSU students on campus for four to five years. However, his situation on campus grew more complicated after construction on the road completed.

Saunders said the issue was conveyed to him as such.

“[I] will park where there’s a designated parking meter,” Saunders said, “Or [I] will not park on Lincoln Avenue.”

Before Lincoln underwent its renovation, the truck could regularly be found parked in front of the Lincoln Building. Saunders said the construction reduced the width of the street and removed many parking areas without meters, making it difficult for the food truck to do business outside of larger events. 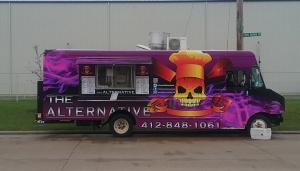 “I’ve done three events already this year for the different student activities,” Saunders said. “A couple of them were on campus, not on Lincoln Avenue, but up behind the stadium when they had the [Youth Football Day]. I was invited for that.”

Ron Cole, YSU’s public information officer, said the problem with The Alternative was Saunders’ insistence on parking in no parking areas. He said Saunders claims the city gave him permission to park anywhere he wanted since he had a vendor license.

“That was not the case,” Cole said. “Zoning, street department and YPD explicitly told him that he did not have permission to park in a no parking area.”

Regardless of the circumstances behind Saunders’ absence, Alternative customers lament the lack of his service on campus. Kenny Reyes, faculty advisor for Rookery Radio, said he frequently patronizes the food truck and seeks out Saunders wherever he can find him.

“The first time I saw the truck out there, I saw that he had the Defibrillator Burger,” Reyes said. “I ordered one. It was like a mountain of sin on a plate … It was fantastic.”

Reyes spread the word to his colleagues and on social media. For fans of The Alternative, he said Saunders offered fresh, tasty food for reasonable prices at a convenient location.

Reyes said customers would get filled up on what they would get from him, and for the price, compared to on campus, customers don’t get anywhere near as much food as they would at The Alternative.

“You would get almost a pound of French fries … and the burgers were humongous,” Reyes said.

After retiring from being a commercial truck driver, Saunders built his food truck from a decommissioned UPS truck and started his own business. He obtained one of the first food truck licenses in Youngstown. Although Saunders still does business in town, he misses operating close to campus.

“I had been around food trucks in California, Texas, Florida, especially up in Jersey and New York,” Saunders said. “I love to cook and all of this. So, it was an ideal way for me to retire. And it’s been fun. The kids are always good.”