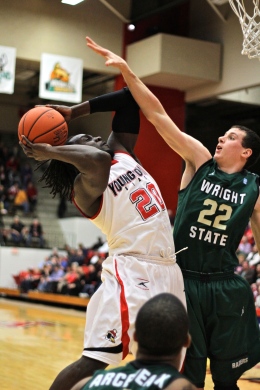 Senior guard Ashen Ward attempts a tough shot over sophomore Cole Darling on Thursday night at Beeghly Center. The Penguins defeated Wright State University, 61-54, and are one win or one University of Wisconsin-Green Bay loss away from hosting a tournament game. Photo by Dustin Livesay/The Jambar.

On Monday, sophomore guard Kendrick Perry emphasized that the team must be hungrier in order to have a chance at hosting a Horizon League tournament game.

But the win satisfies the team for one night only.

“Don’t be satisfied,” Perry told his teammates after the game. “We have one day to prepare for a very good Detroit team. We can relish this victory for the rest of the night, but tomorrow we just got to come in hungrier.”

The win pushes the Penguins to 10-7 in the Horizon League (15-13 overall). They end the regular season on Saturday at Beeghly Center against the University of Detroit Mercy.

“In my mind, I think they’re the most talented team in the league,” said YSU head coach Jerry Slocum in the post game conference. “They are a very, very gifted basketball team. They have size, which is a concern.”

The University of Wisconsin-Milwaukee won on Thursday night while Detroit lost, creating a virtual tie for fourth place in the conference.

The University of Wisconsin-Green Bay also won on Thursday night and is 9-8 in the league. If the Penguins defeat Detroit on Saturday, they will host a first-round tournament game.

“We do know what’s at stake with a home playoff game, so I think that brings us a lot closer together,” Perry said in the conference. “It makes us more dangerous as a unit.”

As for Thursday night, the Penguins went on a 15-0 run early in the second half that helped pave the rest of the way after trailing, 29-27, at halftime.

“Obviously we did a great job in the second half defensively,” Slocum said. “Played a little tight in the first half. We knew the importance of the game.”

Perry said the Penguins changed their game plan at halftime.

“We didn’t really double down in the post,” Perry said. “We got rebounds, and that led to fast break points. I think that’s what took us to the top.”

The Raiders (13-17, 7-10) brought the game within four (59-53) with less than two minutes remaining. Perry soared to the lane and made the game-deciding field goal.

“With a moment like that, I just try to put the team on my shoulder,” Perry said. “When I saw the opening, I just thought be aggressive like I always am.”

“He’s on a good stretch right now,” Slocum said. “We need him defensively and offensively.”

The one aspect to Perry’s game on Thursday that Slocum emphasized was he contained junior Julius Mays who scored seven points. He was fifth in the conference averaging 14.4 points per game heading into Thursday.

Slocum said Eargle has a gift that cannot be coached.

“He sees it, has great anticipation skills, has bailed us out time and time again, and when the officials let him play a little bit, he is really a factor,” Slocum said.

Sophomore Vance Hall led the Raiders with 13 points but collected no rebounds and zero assists. Everybody else on the roster scored under double digits apiece.