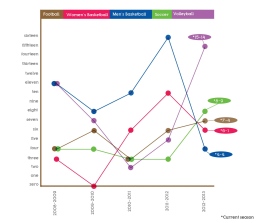 During the fall season and early portion of the winter season, many of Youngstown State University’s athletic teams have seen considerable improvement and success.

“Obviously, we’re happy with the direction [it’s going],” said Ron Strollo, executive director of intercollegiate athletics. “We kind of felt that for some of the programs, it’s been a multiyear process. We’re happy to see that our kids are competing better and having better experiences.”

The multiyear process Strollo referred to was YSU’s adjustment to the Horizon League conference in 2001 from the smaller Mid-Continent Conference.

“When we moved into this conference for most of our programs, competitively, it was a significant step up,” Strollo said.

Strollo added that the tougher competition combined with a lacking budget resulted in poor results for much of the 2000s.

“When you don’t have resources just to throw at the problem, sometimes it just takes a little bit longer to get where you want to go,” he said.

Recently, the Penguins are getting where they want to go — or at least taking steps in the right direction.

Finishing with an overall record of 8-9, Lemke’s squad qualified for the Horizon League tournament.

“Coach Lemke did a good job of bringing in kids who could play right away,” said Jamie Hall, an editor for YSU Sports Information who handles media relations for the soccer and men’s basketball teams. “So, you had a lot of depth and a lot of talent on the field at the same time because of good recruiting.”

Meanwhile, the YSU volleyball team — much like the soccer team — was much improved.

Led by first-year head volleyball coach Mark Hardaway, YSU was 15-14 overall. The 15 wins were more than those in the previous three seasons combined, including only five victories in 2011.

Furthermore, the Penguins contended for the Horizon League tournament.

“I think, if you ask them, they played with confidence,” said John Vogel, an editor for YSU Sports Information who handles media relations for the volleyball and women’s basketball teams. “They played with an enjoyment and remembered how fun volleyball can be.”

Capping the fall sports schedule was the YSU football team. Although the Penguins didn’t make the playoffs, they took another step forward.

“For football to be above .500 and keep showing improvement under Coach Wolford was good to see,” said Trevor Parks, director of YSU Sports Information. “The good thing is you look at Coach Wolf … and he kind of turned the corner on some things.”

Like Wolford, new or fairly new coaches lead many of YSU’s teams. Strollo said recent successes in picking the right coach have sped up the process.

“I think, fortunately, we’ve been able to sell our story a little better when there has been openings,” he said.

Parks addressed YSU’s selling points when he said, “The coaches see the facilities that YSU has. They see the support that the administration has in them, and they see that everybody here works hard, is genuine and wants them to succeed.”

As for the winter season, the YSU basketball program is moving in the right direction as well.

At the head of the progress is third-year women’s basketball coach Bob Boldon, who guided the Penguins to a 10-20 record last year.

“This being Coach Boldon’s third year, that’s helped,” Vogel said. “If we can hit some shots like we did last year, we can be pretty darn good.”

Although the men are 4-4 on the short campaign, all signs are pointing to another improved season.

“They have a really solid core, and they’re talented,” Hall said. “As a team, they don’t make many mistakes and are used to [head men’s basketball coach Jerry] Slocum’s system.”

While it’s hard to put a general explanation on the mass improvements to YSU’s athletics program, Parks credited two simple aspects: hard work and dedication from the highest staff members down to the student athletes.

“For whatever reason, maybe this year it paid off a little more” Parks said. “I think it kind of runs in cycles, and right now it’s on an uptick. I think we’re kind of seeing when one team has success, it kind of motivates the other teams to have some more success as well.”