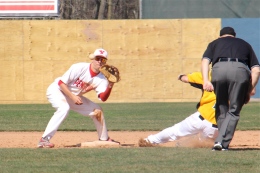 Sophomore Phil Lipari looks to tag out a Milwaukee player attempting to steal second base in Saturday’s game at Eastwood Field. The Penguins won the finale on Sunday, avoided the three-game sweep and will use the victory as motivation for Tuesday. Photo by Dustin Livesay/The Jambar.

The Youngstown State University baseball team won just one of the first 14 games before opening its season at home on Friday — and is hoping that Sunday’s “emotional” victory will provide a spark as it moves forward.

The Penguins dropped the first two games to Horizon League rival University of Wisconsin-Milwaukee 5-4 on Friday and 7-2 on Saturday, falling to 1-15 on the season.

“We just got to come out swinging like we did [Friday],” said sophomore third baseman Drew Dosch after Saturday’s loss. “Put a little bit of both games together. The biggest thing for us right now is getting the big hit. That’s going to be the focus.”

They got the big hit.

Senior first baseman Jeremy Banks drove in Dosch on a walk-off RBI double in Sunday’s game for a 4-3 win in 11 innings against the Panthers.

“A big emotional win that we did need,” said head baseball coach Rich Pasquale. “They wanted it, and they got it.”

Sophomore outfielder Marcus Heath collected two clutch hits in four at-bats and three RBIs in the game. He said the main focus was getting a win.

“We’ve been playing some pretty tough games lately,” Heath said. “We’ll use this game as some momentum for Tuesday and lead into [the University of Illinois at Chicago] next weekend.”

The Penguins face Notre Dame College of Ohio on Tuesday at Bob Cene Park in Struthers. It’s their only home game this season. Pasquale said he does not know about Notre Dame, but he will come game time.

“I don’t have how many players they have. I don’t even have what colors they are,” he said. “Our focus was this team, this weekend.” Thus far, one of the main struggles this season has been pitching. The Penguins have a combined 8.20 ERA, which is the worst in the conference. Pasquale said pitching is easy to spot on the stat sheet, but it’s not the only struggle.

“Yeah, there were times where pitching didn’t help, but during a lot of those times, they were making their pitch and doing good things,” Pasquale said. “We weren’t playing good defense behind them either.”

The Penguins also rank last in the HL with a .950 fielding percentage.

Banks has been one of the team’s catalysts on offense. He ranks first on the roster with a .426 batting average, 29 hits, nine doubles, five home runs, 25 RBIs and a .779 slugging percentage.

Dosch is behind Banks, with a .412 batting average, 28 hits, four doubles and a .559 slugging percentage. He is also tied for first on the team with 13 runs.

Despite the early struggles, Pasquale said the team is improving every day.

“I don’t let them get down,” Pasquale said. “They all have good character, good guys that come hardworking every day. They’re maturing, and they’ll be fine. … We don’t think [our record] is a reflection of the talent that we have on this team. … Hopefully, we can just get some wins. That’s all I can really say.”