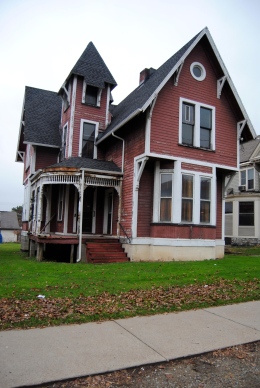 The Thompson-Sacherman House on Lincoln Avenue has been cited by the city for property maintenance violations and will be torn down. No date has been set for demolition. Photo by Kevin Alquist/The Jambar.

The Thompson-Sacherman House on Lincoln Avenue is set for demolition nearly a year after it was saved from a similar fate.

The house has been cited by the city for property maintenance violations.

“If the university had all the money it needed, it would be nice to see the house used for something,” said John Hyden, executive director of facilities at Youngstown State University.

The university has reached a point where it must either invest in the house or tear it down. To get the house up to code, YSU would have to replace the windows and siding, something Hyden said is not practical.

“It is much more fiscally responsible for the university to spend money fixing other buildings that need maintenance,” he said.

Trustee Harry Meshel said the problem with older homes like the Thompson-Sacherman House is that the buyers have no plan for the homes at the time of purchase.

“The buyer bought the property before they had any idea what they wanted to do with it,” he said. “The buyer has decided to tear it down and doesn’t have the heart or the willingness to do what is supposed to be done with these buildings.”

Meshel said he understands that the funds are not available to bring the home up to code, but he stresses that it should have been maintained in the first place.

Last year, some community members asked the university to save the Thompson-Sacherman House, as well as the Peck House and the Pilgrim Collegiate Church on Wick Avenue.

A committee was formed to find a better alternative for the two houses and church.

Because no uses have been identified, the university will move forward with the demolition of the Thompson-Sacherman House, though the future of the other two buildings has yet to be determined.

“I think it’s time to demolish the house,” Hyden said. “If something isn’t done soon, the house is going to fall down on it’s own.”

The Thompson-Sacherman House was built in 1882 by Rufus F. Thompson and is listed on the National Register of Historic Places.

The Peck House, located in the Wick Avenue Historic District, was built in 1887 and is one of six mansions remaining on Wick Avenue.