The former Secretary of State — joined by Sen. Sherrod Brown and Rep. Tim Ryan — spoke to a crowd of supporters at M7 Technologies, an advanced manufacturing firm located in the city’s Ohio Works Industrial Park.

“There are a lot of folks who claim, ‘Well, you know, we can’t bring manufacturing back. We can’t make things in America,’” Clinton said. “I just fundamentally, absolutely disagree with that.”

Clinton said the advanced manufacturing techniques on display at M7 Technologies and similar firms are capable of spurring a renaissance. She said her administration would protect American businesses from unfair overseas competition.

“We are going to stop China or anybody else from dumping steel into our market, undermining our businesses and our workers,” Clinton said.

She said education is the key to creating more good jobs with rising incomes, alluding to the Youngstown Plan, which critics have called a takeover of the Youngstown City Schools. 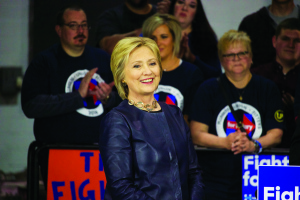 “There are too many Republicans who want to shut down public education,” Clinton said. “They don’t seem to understand that public education is the foundation on which we build the middle class.”

She advocated for providing more help to teachers who support kids in poor districts that struggle with poverty and come from troubled homes.

She also referenced the conflict and controversy that has followed some of her competitors on the campaign trail.

Jordan Wolfe, a political science major at Youngstown State University, came out to the event. He said the three-hour wait for Clinton removed some of the energy from the room, but he was happy with the event itself.

“It was nice to see a lot of local politicians,” Wolfe said. “It was nice to hear not only Tim Ryan and the Senator, but also Hillary talk specifically about issues addressing Youngstown.” 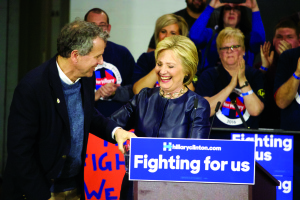 Wolfe said he attended to get a personal perspective on Clinton, but she wasn’t successful in winning him over.

“I thought it was an exciting opportunity,” Wolfe said. “But it didn’t exactly persuade me to vote one way or another.”

Before the event, Sen. Brown spoke to The Jambar about Clinton’s struggle to engage college-aged voters, acknowledging that Sanders has captured the youth vote.

“Bernie’s kind of the new thing in town, the new old thing in town,” Brown said. “Hillary’s been around, and she’s going to win them over time.”

He said when Clinton left her position as Secretary of State, she had very high approval ratings, but since then she has weathered a consistent stream of attacks from the right while Sanders has not been subjected to that level of scrutiny. Brown said he’s confident she’ll win over young voters when they learn more about her in the general election.