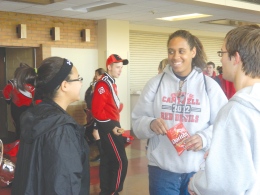 “I’ve never really been accepted by my peers, and band was the only place I felt accepted,” Herns said. “My friends and I joke and say that marching band is for misfits.”

On Saturday, Herns and 25 other high school seniors participated in Senior Day, sponsored by the Youngstown State University Marching Pride.

The event allowed students to get a behind-the-scenes look at how a collegiate marching band prepares for performances.

“High school is so much different,” Herns said.

Herns said she was surprised that some Marching Pride members even stretch before their performances.

Herns’ brother is a freshman bass drummer for the Marching Pride. She plans to follow in his footsteps by playing baritone for YSU.

Her father, two aunts and two younger siblings also participated in marching band. Her mother was in concert band.

Throughout her six years as a part of the CMHS band, Herns grew to love it.

“The first two years of marching band, I hated it because I got picked on, but, by the third year, I loved it and wanted to stick with it,” Herns said. “My parents are happy that I found somewhere I’m comfortable.”

Angelica Vega, a CMHS graduate, is now part of the Marching Pride, and she serves as a mentor to Herns.

Vega has marched for five years and has spent one year playing trumpet for YSU.

“I think it’s a great idea for the students to experience this,” Vega said. “It’s awesome that they can see what our day is like so they’re not scared to sign up.”

Vega said she would have enjoyed the chance to work with the Marching Pride while still in high school.

“Now that I’ve experienced it in college, I have a lot more knowledge about it,” she said. “It’s different than high school. You learn more technique.”

Brandt Payne, director of athletic bands, said the number of high school students who participated in the event impressed him.

He said the event is a major recruiting tool for the Marching Pride. Subsequently, he intends to continue the event in the future.

“A big part of this is that we represent the university, no matter where we are,” Payne said. “Another big part of it is how we perform. The biggest part is that we are a big family. Having fun and enjoying the experience is what matters.”

Vega said she feels a strong bond with her bandmates.

“We’re family,” she said. “We have to stick together. We have to play together. If one person falls apart, the rest of us fall apart.”

Vega said it was a great feeling to be able to reassure students like Herns that collegiate marching band members are often more accepted than those in high school.

“That lifts a huge weight off of my shoulders,” Herns said. “I have low self-esteem, but it gives me a sense of security that I can walk around and not be judged. I can be myself.”

1 comments Rhea Herns Fri Feb 17 2012 16:32 The Jambar misquoted me twice. I only had one aunt in Marching band with my father and my band friends and I jokes Marching Band was a place for misfits, making a joke reference to “Rudolph the Red Nosed Reindeer” I had a lot of fun spending the day with the Marching Pride. 🙂