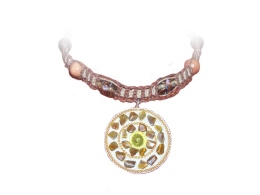 Courtney Schindler worked at Movies 8 in Boardman and as a hostess at the Springfield Grille after graduating in 2008, but said she knew that wasn’t what she wanted to do for the rest of her life.

“I started making jewelry in November 2009, and, after lots of practice, decided to start an online store,” Schindler said.

In August 2010, Schindler started her own business, HempHugs. Her main goal is to represent individual creativity and style.

“I saw people making hemp jewelry at various music festivals and online, but it was always with the plain, thick hemp and same knotting patterns,” Schindler said. “So I decided to do all colorful pieces, something unique and different that sticks out.”

Schindler has attended music festivals since she was 17 years old.

“Once I started going, I really got into the music and art I saw at the vending stands and wanted to do my own thing,” she said. “To be able to set up and sell my stuff at different shows and festivals is basically combining all my favorite things into one. It’s the perfect job.”

Schindler also sells her designs on etsy.com and has 141 items available.

She is not afraid of a challenge, though. Schindler accepts any order, and looks forward to designing things outside of the box.

“Once I got better, I started making ashtrays, incense burners and other things,” she said. “Aside from jewelry, I also make headbands, belts, keychains, hair clips, lighter and ChapStick holders, dog leashes and collars, and whatever other ideas I can come up with to make out of hemp.”

The items sold, on average, range from $5 to $25, but it depends on the cost of supplies that go into the product, and the amount of time it takes Schindler to construct it.

“I try to keep my prices as reasonable as possible,” Schindler said. “I also do wholesale prices for people and businesses that want to sell my items in their shop.”

Richard Steger, Schindler’s boyfriend of five years, helps with the financial end of the self-made business, as well as with the clay creations.

“I am very proud to see the progress and success that has been made over the past year and a half,” Steger said. “It was a rocky road to get here, but things are going in the right direction.”

Schindler and Steger try to set up a table as often as they can, but find that business is more prominent in the spring and summer months. However, Schindler is always prepared.

“My boyfriend and I try to do a lot of traveling during the colder months, and I’ll bring my jewelry along in case we see a show or concert,” Schindler said.

Steger said the sky is the limit for the dynamic duo.

“We have friends who want to start silk screening,” he said. “Courtney is about to start sewing classes, and we are going to keep our options open, as well as our minds, for suggestions.”

Steger said that one of the best parts of the business is the delight of selling the creations and seeing Schindler’s excitement.

“From a third-person perspective, it is awesome to see the sheer joy shared between artist and buyer,” Steger said.

The young artisan’s designs are a part of a fundraiser opportunity for her 25-year-old cousin Tina, who has battled cystic fibrosis her entire life.

Help Tina is a foundation Schindler created to raise money for her cousin’s double lung transplant. Schindler sells jewelry and accessories, and the proceeds go directly to the cause.

“Thankfully, just a few days before Christmas 2010, our prayers were answered and she got her new lungs,” Schindler said. “It’s extremely expensive, however, so our family got together and had numerous fundraisers for her, including a spaghetti dinner last March.

“I started making purple hemp jewelry to spread awareness about cystic fibrosis as there is no cure. I donate half the profits from my purple CF awareness jewelry to her medical expenses.”

Schindler said that her central influence is other artists that create things for a living.

“To me, it’s about the love. When you truly love doing something and you can put that love into your work, it shows,” she said. “When my work puts a smile on someone’s face, that’s what it’s about.”