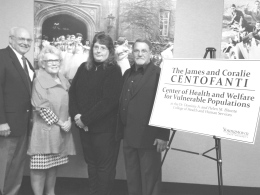 The James and Coralie Centofanti Charitable Foundation officially announced a $1 million donation to the Bitonte College of Health and Human Services at Youngstown State University on Monday.

The college will be the new home of the James and Coralie Centofanti Center of Health and Welfare for Vulnerable Populations.

The center will further provide students with an education that focuses on the center’s four components: student learning, scholarship and research grants, community service and community awareness. Mosca said he is excited about the enhancement of the college.

“We are a college that provides the region and community with a workforce in health care and human services work, and it really strengthens our mission to do that,” Mosca said.

Both James and Coralie Centofanti were dedicated to giving back to their community.

“Today would be a very proud day for both of them,” said Dave Centofanti, their only son.

Mark Graham, executive vice president of Farmers National Bank and chair of the distribution committee of the Centofanti Foundation, said the Centofantis believed “those who had been given much had a greater responsibility to do much.”

Graham said Centofanti was extremely active within his Canfield community, as well as with Farmers National Bank, serving for five years on its board of directors and being a large shareholder of the company.

“He was always helping others and would be very happy about how the center is going to be able to impact students, faculty and the Valley at large,” Graham said.

Mosca said the James and Coralie Centofanti Center of Health and Welfare for Vulnerable Populations will begin awarding research grants as soon as spring. A symposium is planned for early next fall, and scholarships will be awarded then as well; applications will be available in the spring.