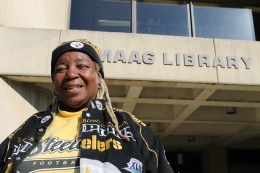 Hattie Wilkins, a nontraditional student at YSU, devotes her time and energy to revitalizing the landscape of Youngstown by encouraging urban farming. Photo by Lee Murray/The Jambar.

When she is not attending classes at Youngstown State University, Hattie Wilkins spends a lot of time with her hands in the dirt. She owns a community garden on the corner of Fairmont and Covington, a former abandoned plot of land that she has transformed over the past three years into an oasis of green.

Her third growing season, she said, was a resounding success.

“It was real good this year,” Wilkins said.

Wilkins is one of many gardeners and urban farmers who are rejuvenating Youngstown’s vacant plots. She said the like-minded individuals help one other, meeting at community members’ gardens and sharing advice.

“We had some garden parties, and everyone brought something that they had grown or they had made,” she said. “There’s a fellowship with one another. At my garden party, I think I had 50 gardeners at it.”

This year, Wilkins worked with the Youngstown Neighborhood Development Corporation to install a water line to her garden. She had previously been using water from a fire hydrant until the city insisted that she find alternative arrangements.

Wilkins said that YNDC will have to remove the line before winter to prevent it from freezing. The line, which cost YNDC more than $1,000, will be stored until spring when it can be reinstalled.

In addition to beautifying her neighborhood, Wilkins is an advocate for grass-roots political activism. Before attending YSU, she was the union president at Brentwood Originals, where she worked for 35 years. She orchestrated a walkout because, she said, the company was cutting pay.

“I’d talked people into going out on strike because they were talking about, instead of giving us raises, they were going to take money from our 401k and put [less money in our paycheck],” she said. “I told the people it’s now or never. … If we take this, we’ll be living on our knees for the rest of our lives.”

The strike lasted for more than two months. Wilkins lost her job in October 2008 following a heated debate with management over the company’s Occupational Safety and Health Administration compliance issues.

At 62 years old, Wilkins is engaged in local community groups and involved with her church. As well as working alongside YNDC, she is involved with the Mahoning Valley Organizing Collaborative, the Youngstown Warren Black Caucus, Mount Sinai Missionary Baptist Church and Ambassadors for Christ.

Wilkins said she’s enrolled at YSU because she wants to help people.

“I think I’m going to do nonprofit [leadership] because I like to teach people how to garden, and I want to show people the different avenues to go down, so they can get aid,” Wilkins said. “Even though I’m a little over the hill, there’s still time. I still have time to help somebody in my lifetime, show them a better way.”

She is in her fourth semester at YSU, and she hopes to set a good example for her great-grandchildren.

“My great-granddaughter was my motivation to come here. She helps me work in the dirt, and she asks a lot of questions. I want to be able to answer [her questions], or be able to do the research myself to answer the questions,” she said.

Two years ago, Wilkins was robbed and her house was burgled. Her gold necklaces were stolen from her neck, and her door was kicked down by the thieves that stole her television.

Despite being a victim of crime, she said she thinks the city’s problems can be solved by finding hard work for idle hands.

“If they would give these young people something to do with their lives, we wouldn’t have these problems,” she said. “They’d be too tired to sit around, waiting around for some old person to come home.”

Wilkins said the banks that own the foreclosed properties in her neighborhood are responsible for those problems, too.

“I have five vacant homes in the one block where I live at. For every vacant house that’s near your home, that’s $10,000 off of the price of your home,” she said. “If they would tear them down, you know, we could make a community garden or park or something for the kids to play in. It’s bank-assisted crime.” Wilkins said she feels safe living in a neighborhood where people look out for one another.

“I love my neighbors,” she said. “After I got robbed, my neighbors would sit on their porch until I came home. The young girl across the street would wait up for me, [too], and would have a stern warning for me when I got home about staying out so late.”

Wilkins has a strong voice in her community. She has an idea of why so many people pay attention when she speaks on issues that involve them.

“Because I’m everyday people,” she said.