Higginbotham teaches in Harvard’s history department and the department of African and African American studies and has received several awards including the 2014 National Humanities Medal from President Barack Obama.

Higginbotham’s speech stemmed from hearing Alicia Garza, co-creator of the Black Lives Matter movement, speak at Harvard. When someone suggested that all lives matter, Garza responded, “When black lives matter, all lives will matter.” Higginbotham pondered these words and came to the conclusion that they were true. 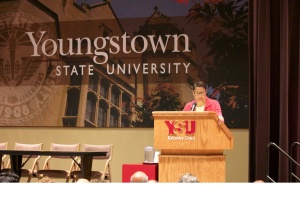 She documented several instances throughout history when the definition of all lives in the United States excluded black lives — beginning with “all men are created equal” in the Declaration of Independence and “We the people” in the Constitution.

“Our great Constitution begins, ‘We the people of the United States,’ yet the meaning and interpretation of those words excluded persons of African descent for much of the history of this nation,” Higginbotham said. “What does it mean to say all lives matter, when the law of the land, the constitution upheld not the humanity of black people, but rather the right of white people to own human property.”

She outlined Supreme Court decisions, noting that the definition of person in Dred Scott v. Sanford did not include black Americans. She also pointed out the hypocrisy of Plessy v. Ferguson’s separate but equal doctrine.

“The law had systematically defined and confined the Negro’s place,” Higginbotham said. “It did it to these tangible spaces, but it also did it in intangible ways in these ideas that speak to what we think of today as public opinion. And this public opinion located and assigned black people within a racial order according to a hierarchy that positioned them at the very bottom.”

She then compared those involved in the Black Lives Matter movement today with Ida B. Wells, who led a crusade against lynching in the late 19th century.

“Ida B. Wells was criticized in ways similar to the criticisms voiced by many of our, the older generation, toward the younger generation,” Higginbotham said. “Black people, not just whites, found her style problematic.”

Higginbotham said she cringed when Black Lives Matters confronted Hillary Clinton and Bernie Sanders over the summer, but with articles such as “Are We a Race of Cowards?” Wells likely made people in her day cringe as well.

Higginbotham mentioned that the federal government was never able to pass an anti-lynching bill, many of which included provisions addressing extrajudicial killings by law enforcement.

She endorsed Black Lives Matter but argued for a wider movement that encompasses more than just police violence and mass incarceration by also addressing issues like black-on-black violence and reentry.

She advocated for something resembling the wide array of grassroots organizations, many that disagreed with one another, addressing different issues that existed in the ’60s.

“I cannot overstate the importance of a great groundswell across generations of people making a difference in multiple ways without privileging or thinking that there’s only one way, or one type of organization or one type of personal style to make black lives matter,” Higginbotham said.

“It’s so exciting to have programs on our campus that will allow us to have those dialogues,” Tressel said. “To bring speakers in who can really challenge us to think … that’s the neat thing about being on a college campus is that we can have that dialogue.”

Jones said that those who ignore history are doomed to repeat it, and historians like Higginbotham play an important role in bringing attention to the past events that contributed to current conditions.

“No one is better prepared to help our nation emerge from the cloud currently engulfing all of us with regard to race and this notion about worth,” Jones said. “What is life worth for all of us? What is it worth for black Americans?”

A lengthy Q&A session followed the lecture in which Higginbotham fielded questions from a woman returning from the funeral of her brother, who died at the hands of police, and a younger man who works with teenagers on Youngstown’s South Side.

The woman asked how we create a narrative that makes people that aren’t marginalized realize that violence may impact their lives as well because she never thought it would impact hers. Higginbotham said the woman is creating that narrative by serving as a witness and sharing her story.

“We recognize that you woke up one morning not knowing what that day would bring, and it brought you something you never would have expected,” Higginbotham said.

The man from the South Side asked how to respond to youths who say their lives don’t matter, they’re already dead or they would be lucky to make it to 18 or 21.

“It helps to have stories about people who faced terrible odds, and who had terrible losses in their lives because sometimes when people know about those people’s lives, they realize that they can do it too,” Higginbotham said.

The Epsilon Mu Omega and Delta Delta chapters of Alpha Kappa Alpha presented the event in collaboration with the Bitonte College of Health and Human Services, YSU Student Diversity Programs and the Youngstown Chapter of Kappa Alpha Psi.