Even though the ways and the locations where people gather may have changed for Youngstown State University students over the years, the general aspect of hanging out remains the same no matter when or where.

“It gave students a place to hang out on campus,” Brennan said. “Meanwhile, you had other spots on campus, various bars and other locations just off campus.”

Brennan said in the late 1960’s, there was a location for students to hang out at that had a 1960’s themed atmosphere inside called The Gates of Eden. He said there was music, poetry and it reflected the 1960’s culture at the time.

“Being a commuter school, you didn’t really have a lot of people hanging out on campus perse,” Brennan said. “They would just go to work or go home, much like they do today.”

Brennan said YSU is still a commuter school, but there are a lot of students who want that campus experience. He said a lot of the experience is social in addition to academic.

“They’re going to want to be a part of whatever social scene there is,” Brennan said. “When I was a student here, for my first two years, I commuted. By my junior year, I decided I wanted to be here, so I rented a room on the north side of a private residence.” 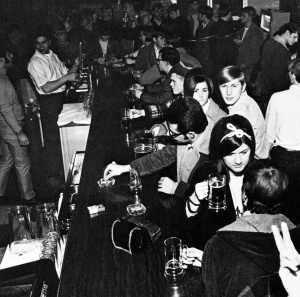 “They used to show movies in Kilcawley,” Brennan said. “Even today, there are students that commute that would want that experience.”

Brennan said the undergoing changes in Youngstown is providing more of an opportunity for university students to hang out, go places and get away from it all compared to what it had before.

Jo Ellwood, a 1992 graduate of YSU who double majored in math and computer science, said if she didn’t have to eat, she hung out in the computer lab or the library. She said if she did eat, Inner Circle Pizza was her place to go.

“In the student center, there was a place that had pool tables,” Ellwood said. “It had terrible pizza and warm beer.”

Ellwood said when she studied alone in the library, she would lay down on the double chairs, cuddle up with her book and study, or she would participate in study groups. She said the Candy Counter in Kilcawley Center was also a part of her daily routine.

“I would study on campus,” Ellwood said. “I wasn’t very good at studying at home.”

Ellwood said she could write her algorithms and programs at home, and if she had to read a lot and prepare for a test, she had to be at the library. She said the only two places she went to off campus were Charlie Staples and the public library.

Tim Fitzpatrick, a 1985 graduate of YSU, said Inner Circle Pizza was also one of the places he would frequently hang out at. He said The Brass Lion, which was across from Fifth Avenue at the time, was another hangout spot he would go to.

“I always felt bad for the wait staff because we would come in and be able to piece together just enough to buy a pitcher of beer and a pizza, and have literally pennies left offered as a tip,” Fitzpatrick said.

Fitzpatrick said his social life at YSU took place more at The Jambar than anything else while he was an editor. He said those were fun years and a great training ground.

Even though the way campus looks has changed over the years, students still hang out in the same places. The library, Kilcawley Center and Inner Circle Pizza still remain campus favorites.