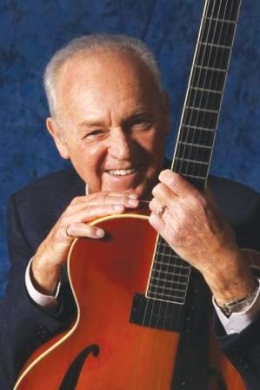 From the late 1960s until 2001, Joe Negri lived in “Mister Rogers’ Neighborhood.” Viewers knew him as Handyman Negri in those days.

On Friday, Negri will conduct a jazz clinic at Youngstown State University.

The clinic will be held from 12:30 to 3 p.m. in Room 2222 of Bliss Hall. It will feature several performances by Negri and Dana School of Music students.

“Because [Negri] is located in Pittsburgh, the students of the Dana Guitar Association of YSU took advantage of his proximity to Youngstown to see if he would be interested in teaching a clinic,” said Francois Fowler, an associate professor of guitar at YSU.

“We were delighted that he agreed to do this,” Fowler said.

As a child, Negri began performing. But when puberty changed his voice at the age of 13, Negri said he thought his career was over.

“I thought, ‘What am I going to do?’ after I lost my voice I always had,” Negri said. “I was thinking about quitting the business around 14 or 15, but I heard Charlie Christian when he played for Billy Goodman, and he was the face of jazz guitar.”

After changing his focus to guitar, Negri got an offer from a top country swing band. He went on the road at age 16 and toured nationally for two years.

The next job he landed would lead to a 40-year career in the TV industry as a performer on two programs in Pittsburgh. One of those was “Mister Rogers’ Neighborhood.”

“That made me recognized all over the country and maybe all over the world,” Negri said. “I’ve always been grateful for that, and it was a wonderful experience.”

Negri said he has taught national classes that feature a specific approach to the guitar, but he thinks this one will be different.

“I am going to critique the students while they play for me,” Negri said. “I will be commenting on what they are doing.”

The clinic will include performances from guitar, percussion, woodwind and violin studios. In the past year, the Dana Guitar Association has offered clinics featuring Duo Spiritoso, an international classical guitar duo, and Johannes Moller, a Swedish classical guitar virtuoso.

“The students and myself have worked tirelessly, raising money to bring in these world-class artists,” Fowler said. “With the additional help and support from the YSU student government and the generosity of the Dana school, we were in a position to bring in a third artist this year.”

The students thought it would be appropriate to bring in a jazz musician.

“Because the guitar studies program focuses on classical and jazz guitar, I thought this was appropriate and was very happy to support their initiative,” Fowler said.

The clinic will be free to the public. All ages are welcome.

Fowler is expecting a great turnout.

“I think because Mr. Negri is so well known as a legendary jazz guitarist but also as a star of ‘Mister Rogers’ Neighborhood,’ the word is really getting out there,” Fowler said. “People are looking forward to this event with great enthusiasm.”

“Honestly, I’m so glad they invited me, and I’m anxious to meet the students because they seem to be very into the same things I am,” Negri said. “I’m really looking forward to it because there have been so many musically talented people that have came out of [YSU].”