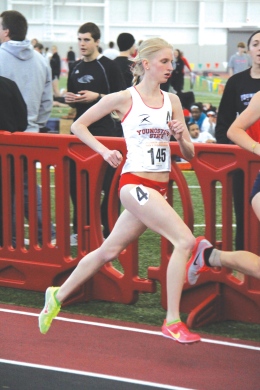 Samantha Hamilton runs at the Horizon League championships in February at the WATTS. She looks to break even more records before her YSU career is over. Photo by Dustin Livesay/The Jambar.

But she still has nearly a season and a half to capture more.

Hamilton holds the indoor record for the 1-mile run and for the 1,000-meter, 3,000-meter and 5,000-meter runs. Going into each season, those were the goals she set for herself, she said.

“Last year, I really had the 5K circled,” Hamilton said. “I thought 17:16 would have been pretty achievable, but things did not come together as well. This year has definitely been a whole different ball game, in terms of developing into a better runner.”

But Hamilton wasn’t always just a runner. She started track and cross-country in seventh grade and played basketball during her first two years at Jackson-Milton High School.

That changed after she broke her foot — twice.

“I was on crutches for a couple weeks and thought everything was healed, and in my first game back I broke it again,” she said. “After that, I kind of just stuck to running. Thankfully, I did.”

“She is somebody that not only lives it, not only between practice time from 3 to 6, but she lives it 24/7,” Gorby said. “She is at every road race; she is looking up and reading all about running. She lives it more than any other athlete that we have.”

When choosing a college, Hamilton narrowed it down to two schools: YSU and Ohio State University.

“I knew I wanted to run at Division I, and when it came down to reality, I was a little nervous going somewhere so big,” Hamilton said. “I didn’t really have to adjust to many things coming to YSU. All through high school, I trained in Mill Creek Park, and I still train there.”

Hamilton said she always runs in the park.

“It is one of probably the best places to run in the country,” she said. “It gets really hard in the winter because I run on them until I can’t anymore. In the middle of fall, it gets tough, too, because of all the leaves. I am usually running on the trail all year round.”

“It has been a very positive experience for me because, not only is she someone to do the workouts with, but she is a constant motivation for me to always do better,” Pompeo said.

Gorby said Hamilton has found a good training program that works for her.

“From a training standpoint, we have figured out what works for her over the last two to three years,” he said. “It is kind of neat to see someone now drop a whole minute.”

Hamilton said she increased her training mileage for the season. She said that has been the difference in her success.

“I kind of found a happy medium,” she said. “I raised my mileage and stuck to around 55 miles a week. It seems to have gone pretty well. I think that is kind of the main difference, but 55 is low compared to what some people do.”

Hamilton added that Watson and Tressel Training Site has helped the team.

“The farthest we would go is Geneva just to workout,” Hamilton said. “That’s a few hours of driving to work out, and it took its toll on us. Everyone was tired, and we were getting home so late.”

Though her senior season remains, Hamilton said she is looking forward to her future and wants to keep running.

“There are like sponsorships you can get,” Hamilton said. “It is kind of like applying to college. You just kind of apply to different companies. There are some smaller companies that will sponsor you. Hopefully, as long as I am healthy, I plan on doing some big things after college.”