This weekend the Youngstown Business Incubator hosted Youngstown State University’s second Hackathon. Hack YSU, a YSU student organization, invited over 150 students from local colleges, who specialize in hardware and software development, as well as coding, to participate in the event.

Joe Duncko, the Hack YSU student coordinator, was the originator of the Hack YSU event and has attended a number of hackathons at other universities.

“YSU Hackathon is a chance for students to build their portfolios and gain marketability with major companies,” Duncko said.

Duncko doesn’t work alone. His co-coordinator Judah Maendel is following in Duncko’s footsteps and branching out to help the organization grow. 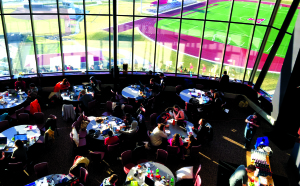 “This is an excellent chance for students to learn something new,” Maendel said. “It’s also very important for networking for individuals to branch out and make friends.”

Students worked on a multitude of projects. One of those projects was a self-automated snow blower built by Sean Meditz and Jeremy Hammond as their senior project.

“You know me and Jeremy don’t have a lot of experience in programming, and the mentors the program offers have been helpful,” Meditz said.

“These events are really fun and exciting for creating unique works,” Palmer said.

“We have been up all night going through the motions and figuring out ways to improve the graphics,” Young said.

Aaron Phifer, another participant, tinkered with his Lego robot that will eventually be capable of using complex algorithms to play a game of Connect Four against a human opponent.

“When the algorithms are complete, this machine will be able to detect my moves and play as my opponent,” Phifer said.

Hack YSU was held in the DeBartolo Stadium Club at Stambaugh Stadium. The convention was attended by a little over 150 people and took place over 36 hours.