The ELECTRI International and National Electrical Contractors Association’s Green Energy Challenge is a yearly competition where students from different NECA chapters gather to come up with and execute a green energy project guided by different rules and requirements. 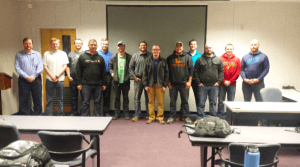 Daniel Vodhanel, president of the YSU Chapter of the National Electrical Contractors Association, said this is the seventh year YSU has competed.

“We’ve always been in the top three within the last six years,” Vodhanel said.

A jury of contractors and industry partners will first evaluate the written proposals of the different groups and choose the top three student teams to give oral presentations of their projects at the competition.

The jury evaluates both the validity and the presentation of the project. The goal of the project is to get the students to focus on problem solving through thinking in new and creative ways, a skill that will come in handy later in their burgeoning careers.

Ethan Parks, vice president of NECA’s YSU chapter, said the competition brings a physical element that compliments the mental element the students are taught in their studies.

“The competition allows students to get hands-on with what we’re learning in class, which is great because it helps us relate class to real-world applications,” Parks said.

This year, the project requires that the groups work on a K-12 educational facility and has to promote solar energy awareness and education.

John Fromel, secretary of the YSU chapter of the NECA, said this year the group was focusing on Poland High School.

“It will not only save them money but also have the project pay for itself eventually,” Fromel said.

The team is suggesting an installation of solar panels and a replacement of lighting fixtures to reduce their electric bill.

Parks said the overall goal of the competition is to get the student groups working on real world applications.

“The competition is meant to get them out of the classroom, get them used to working around equipment, working well with others and networking,” Parks said.

Fromel said the group is proud of their progress and is expecting to place high in the competition.