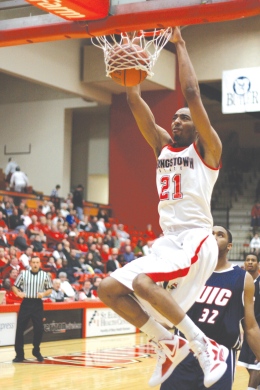 Junior Damian Eargle slams the first basket against the University of Illinois on Jan. 7. Eargle looks to build off his team-leading 120 rebounds and 69 blocks. Photo by Dustin Livesay/The Jambar.

The men’s and women’s basketball programs compiled a 0-4 record between Jan. 12 and 15, and the challenge is only becoming more intense.

“Both games were at the 10-minute mark, very winnable for us, but we turned the ball over too much, which has not been one of our problems,” he said. “In both games, we’ve had some very, very timely turnovers and had some lapses.”

This season, the men are 9-8 overall and 4-3 in the Horizon League.

Five of the seven conference games were on the road.

The men’s team will host the University of Wisconsin-Milwaukee on Friday. The Panthers (13-6, 6-1) rank first in the conference, while the Penguins sit in fourth.

Slocum said the game will be aired nationally on ESPN3.com.

“The last two times we’ve been on it, we’ve had great crowd support,” he said. “I think we’ve had some of the best shows in our league. I think we’ve represented our league extremely well to the point that I think it’s a no-brainer for us to be on.”

All fun aside, Slocum added that the Panthers are tough to face, especially because of senior guard Kaylon Williams. He is averaging a team-best 11.3 points per game and has also compiled a team-leading 109 assists and 27 steals in 17 games.

“We’ve played the fewest home games in our league, which is a tough way to start your year, but now you’ve got probably the best team in the league coming in on Friday night, a team that is having a tremendous year with a couple of tremendous players,” Slocum said.

The men face the University of Wisconsin-Green Bay (7-10, 3-4) at home on Sunday. The women will also face the Phoenix, albeit in a different scenario.

They will play in Green Bay, Wis., on Thursday against the Phoenix (15-0, 5-0), who are riding a 35-game regular season winning streak.

“That’s better than our current win streak,” said women’s basketball coach Bob Boldon during Monday’s press conference. “We’re going to go up there, and we’re going to try our best. It’s what we try to do every time we step on the floor.”

The women’s team (8-8, 2-3) has lost two straight games after falling to Loyola University Chicago on Jan. 12 and the University of Illinois at Chicago at home on Saturday.

“We watched the whole tape, and we may have not done one thing right in that entire game,” Boldon said. “I think from that you take that hopefully we’re a better team this year. It’s a benchmark game. You get to really see where you are.”

The women do have an advantage heading in to their matchup against Green Bay: They’re 6-3 on the road, compared to just 2-5 at home.

“We have been playing very good on the road, which is where we kind of lost two here when we’ve been playing very well in other gyms,” said sophomore Monica Touvelle during the press conference. “It hasn’t been like an enemy or hurting us at all, so I think that’s a benefit to us.”

Touvelle added that the team is looking past the moral victories.

The team will likely be without freshman Heidi Schlegel, who is recovering from ankle tendonitis. She is listed as day-to-day and missed Saturday’s contest against UIC.

Boldon said the best remedy for Schlegel is rest — but that now is not the ideal time for relaxation.

“We’re obviously at the point where we’d like to get her back if that means sacrificing another game if that could be the last game she misses,” he said. “It puts a lot more stress on Brandi [Brown] and Tieara [Jones] to really rebound the ball and do those types of things.”

Touvelle said Schlegel’s absence is a factor, but that the team must learn to play without her.

“She scores a lot, she gets a lot of rebounds, but we just don’t want to be defined by one person, even Brandi,” Touvelle said. “We’re ready to have Heidi back whenever she wants to play. We’ll need her, but until then we’re just going to keep working, and other people need to step up.”

The women will remain on the road after Thursday’s contest to face the Panthers (0-5, 4-11) on Saturday.