Freshman Paige Geanangel allowed only one run in seven innings of work to lead the Youngstown State University softball team to a 3-1 victory over the University of Niagara on Wednesday.

In the top of the seventh inning, with two outs, Geanangel loaded the bases and had the batter at 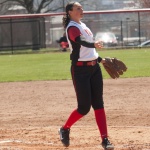 the plate with a full count. But she ripped a fastball over the middle of the plate for strike three and ended the game.

“I was a little nervous,” Geanangel said. “I was just hoping that my defense would stay behind me, and I would get some strikes called.”

Geanangel started off the season with some rust coming from high school. She only won one of her first six starts. But she has caught fire as of late, winning seven of her last eight decisions.

“It was definitely a big change coming into college as a freshman, but my defense has helped out a lot,” Geanangel said. “It was just a big adjustment. The seniors have definitely helped with that, and the other pitcher Caitlyn [Minney] has helped me get used to everything.”

“She’s a freshman. Usually when freshmen come in, it takes them some time to adjust to the college level,” Campbell said. “She’s done a tremendous job of adjusting, and you’ve seen the results recently.”

With YSU leading 2-1 in the bottom of the sixth inning, junior catcher Maria Lacatena hit a solo homer to give the Penguins some insurance. Lacatena finished the day 2-3 with a homerun and an RBI.

“Right off the bat, it felt pretty well. I knew the wind was moving the ball in so I didn’t know,” Lacatena said. “As soon as I hit it, it looked like it was going out but it kept going lower and lower. But then it did go over the fence and it felt awesome.”

The Penguins as a whole have been on a streak lately, winning 10 of their last 11 games.

“The young ladies have done a tremendous job during that streak,” Campbell said. “It’s just putting a lot of the stuff together, and the confidence is there as a team and individually.”

Up next for the Penguins is a three-game home series with the University of Illinois at Chicago starting on Friday.