The Armed Forces Student Association at Youngstown State University hosted a 1950s pin-up party at Suzie’s Dogs & Drafts on March 23. The association received a portion of the food sales from 5 p.m. to 8 p.m.

The party featured a veteran comedian and live music. Ariel McNutt, treasurer for the association, said the association is making a donation to their veteran scholarship fund and the Rich Center for Autism.

McNutt said the association enjoys doing fun events and fundraising. She said they were looking for different ideas for a fundraiser and a lot of people have done ’80s and ’70s themed parties.

McNutt said association members and friends outside of the group participated. She said the association shared the event on social media and the YSU app to raise attendance for the party.

“It just gets the armed forces out there,” McNutt said. “To a lot of people, I feel like veterans have a bad name, but we’re trying to show that we are out here to do good too.” 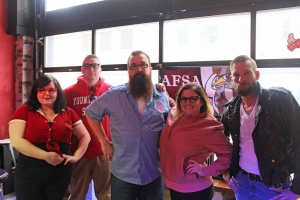 McNutt said the association is looking to keep this type of event once per semester, which she is very excited about.

Michael Ashby, vice president of AFSA, said these types of events get the group out there and show the community veterans can be cool and relaxed.

“We’re just not a bunch of hard-butts that go to war,” Ashby said. “We can be chill and have some fun too.”

Ashby said the ’50s themed party sounded fun and unique. He said YSU has over 200 veteran students who attend the university, and about 20-30 who belong to the association.

“We’re trying to reach out and get more of our college veterans in,” Ashby said. “That’s the ultimate goal.”

Ashby said the association has more events planned in the future that will be announced at a later date.

Tom Ericksen, president of AFSA, said at the end of the day, everything is about YSU interacting with the city of Youngstown in a positive manner. He said the party fit the theme of Suzie’s.

“This is the spot for something like this to go down,” Ericksen said.

The association sold raffle tickets for a variety of gift baskets at the event, including a gift card to the bookstore, YSU apparel, liquor and chocolate and a movie night basket.

“We all need to let our hair down at some point, so it’s nice to get out and just be able to relax and not think about school work for even just a couple of hours,” Ericksen said.

Ericksen said events like this allow him to spend time with people he may not see on a regular basis or people he has not seen in a long time.

“We get to spread the story of what our group is about,” Ericksen said.