The film depicts the lives of prominent figures — an actress, actor, lawyer, poet, photographer and solider — in the transgender community as they face struggles and triumphs.

The event was followed by a brief Q&A for anyone who had questions about the film. This led to a discussion about name changes, coming out to family and personal thoughts on Caitlyn Jenner.

The message of the film was something Full Spectrum’s education director and support group supervisor, Daniel Tirabassi, said was important no matter where ideals lie.

“In or outside of the community, the film has a powerful message that everyone should see,” Daniel Tirabassi said.

Daniel Tirabassi said the day brings awareness of those murdered within the transgender community. 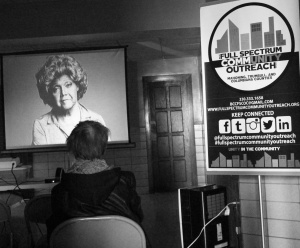 “It’s a day to remember, but also show people that the transgender community is still here and we’re not going anywhere,” Daniel Tirabassi said.

Full Spectrum is a LGBTQIA (Lesbian, Gay, Bisexual, Transgender, Questioning, Intersex and Asexual) support group. Tim Bortner, a board of trustee member, said support groups are held all throughout the year in the church basement for people of all ages in the Mahoning, Trumbull and Columbiana counties.

The program found this space in 2016. Bortner said the church and the Episcopalian religion is very supportive of LGBTQIA beliefs.

The group has been given a lot of access within the church, but they have outgrown their office with the resources they offer such as a miniature library, with the topic of each book dealing with LGBTQIA life.

Searching for more access and support from the community may not be easy, however.

Events and outreach director Charlane Tirabassi said support for transgender people in the community can be a little back and forth.

Tirabassi said they often feel backlash from some of those within the LGB community, excluding the other four letters.

Even with that and the ever-existing person behind the keyboard, Charlane Tirabassi said she feels the area of support for the transgender community has grown in the last 10 years.

It is with this growth of support that brings promise of reality to a dream project of Daniel Tirabassi.

When the movie ended, one person looked for advice from Daniel Tirabassi on coming out to parents and when the right time to do it would be.

“You have to decide when the time is right to tell them,” Daniel Tirabassi said. “Before you do, make sure you have a plan B for where you can stay if things escalate.”

Plan B is what Daniel Tirabassi is working on: a shelter for LGBTQIA adults and youth who have nowhere else to go. He said he’s halfway to his monetary goal, which will go towards securing a facility for this use.

“There are no services here for adult LGBTs and they sometimes are thrown out of other shelters,” Daniel Tirabassi said.

Daniel Tirabassi said he hopes to find a spot in Youngstown for this as well and will also be open to people in the surrounding counties.

Full Spectrum’s following event was April 4, where they gave legal guidance to those considering or going through a name or gender change.