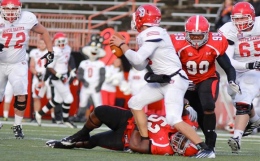 But when pressed to answer the key to success for a resurging defensive line that accumulated 11 sacks in the past three games, the third-year coach caved.

“They’ve been eating glass, and we’ve been giving them raw meat,” Wolford said. “All the usual things to do to get guys to play with fire.”

Jokes and sarcasm aside, the YSU defensive line found a way to improve its performance.

In their first six games, the Penguins registered only seven sacks.

However, in the past three contests, Aronde Stanton, Nick DeKraker, Kyle Sirl and Josh Fenderson have combined for 47 tackles in addition to the 11 sacks.

“Everybody’s getting in, watching extra film,” said Stanton, a defensive captain. “Just seeing what we can do to beat our man that’s across the line.”

In particular, Stanton has been a force to be reckoned with. Over the past three games, he’s had 17 total tackles, 11 solo stops, seven tackles for loss and four sacks.

DeKraker has been almost as efficient, racking up 14 tackles and four sacks.

When asked the key to his unit’s success, Stanton gave a response a bit more logical than Wolford’s. “When you get the one-on-one chances, you [need to] work your move to get that win on that play,” Stanton said.

One of those plays sealed Saturday’s 13-10 victory against the University of South Dakota.

On 4th-and-11 from the Coyotes’ 41-yard line, Stanton and Fenderson teamed up to sack USD quarterback Josh Vander Maten with only 1:16 left in the game.

“I’ve always said, it all starts up front,” Wolford said. “When you’re able to control both sides of the line of scrimmage like we did last Saturday, I think you increase your chances for success.”

Along with the defensive line, the Penguins’ offensive line was prominent in helping snap a four-game losing streak. Running back Jamaine Cook was able to run for 208 yards on 42 carries behind his blockers.

YSU guard Lamar Mady — Missouri Valley Football Conference Offensive Lineman of the Week — said the team needed to get back to the ground game.

“We never ran the ball that much, but I liked it,” he said. “I think we’re going to open the playbook back up and get the confidence to be able to run what we used to run.”

They’ll look to carry that positive momentum into Saturday’s matchup at Western Illinois University at 2 p.m. The Leathernecks are 3-6 (1-5 in the MVFC).

“Everybody’s pretty level-headed right now,” Mady said. “Everybody’s trying to take it from game to game and not think playoffs.”

With a 5-4 record, including 2-4 in the MVFC, the Penguins’ playoff hopes — though still alive — are not favorable.

However, Stanton said the team would just try to control what it can.

“Last year, we had a chance if we would have been 7-4,” he said. “We’re kind of holding our hats on that. But, like I said, we [need to] take it week by week and focus on Western Illinois this week.”