Youngstown State University recently approved revisions to campus posting policies, updating the rules by which students and organizations can advertise for events and meetings.

The posting policy, previously revised in 2012 underwent changes in several areas earlier this summer. Students and organizations must now receive approval before posting their flyer in Kilcawley Center as well as the Andrews Student Recreation and Wellness Center.

Erin Driscoll, the director of student activities at YSU, commented on the changes surrounding the policy and why they took place.

“These changes enable the Division of Student Experience to ensure the purpose of the posting and the requirements for the information on the posting are met,” Driscoll said. “Additionally, the stamping process keeps public posting boards from getting too cluttered and prompts the removal of outdated material.” 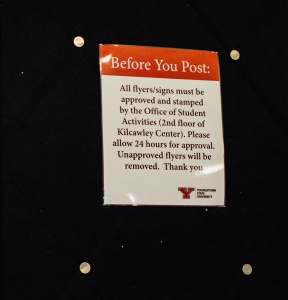 In the past, public posting boards such as the one outside Chick-fil-A became overcrowded with material, many of which contained dates of events and meetings that had been expired for several months.

According to Driscoll, students and organizations that hold events and meetings will be required to remove their flyer of advertisement after the conclusion of their event.

David Ottney, drum major for the YSU marching band, expressed the importance of advertising on campus and spreading the word about various musical events throughout the year.

“I think it’s important to get the word out,” Ottney said. “We hope people see any advertisements we put up and attend our shows.”

YSU urges students to get involved around campus, and the flyers and public postings throughout the buildings can notify them of any events they would like to attend.

According to the updated posting policy, Kilcawley Center follows a slightly different set of rules than residence halls and academic or administrative buildings throughout campus.

Each posting throughout YSU buildings must be monitored and approved by a department head or administrative staff member. Postings also must be placed in designated spaces or will otherwise be removed.

According to Driscoll, there haven’t been any real issues with postings that included insensitive material surrounding racism or libel, or promoting the use of alcohol and drug consumption. However, the posting policy indicates that disciplinary action could take place if the rules are violated, depending on the severity of content.

Kelly Beers, the associate director for student conduct, said the university expects all students to follow all policies on campus, but there are steps in place in case a student or an organization isn’t abiding by the rules set forth by YSU’s posting policy. 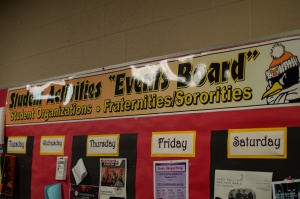 “We review any material that is deemed racist, libelous or promotes alcohol and drug use,” Beers said. “If it’s racist or deals with drug and alcohol promotion, we would review it along with the police. If it’s libelous, the content would fall under harassment and bullying policies on campus.”

Beers added that YSU doesn’t have any standard suspensions or fines in place. She said they would likely review any sort of insensitive material posted around campus without approval based on the severity of the content.