Justin Randall is a Youngstown State University student majoring in jazz performance. Along with studying at YSU, Randall is part of four bands around the Youngstown area.

Randall started playing music in the fifth grade. He originally wanted to play the tenor saxophone, but got drawn into the trumpet and has loved it ever since.

During Randall’s time at YSU, he has participated in four bands one of which is his own creation.

“The Justin Randall Quartet is a group consisting [of] three of the most talented musicians I’ve met since being at YSU,” Randall said. “Anthony Kunovic on guitar, Hobie Butcher on drums and Tim Wilderoder on bass.”

The Justin Randall Quartet is a band that plays a mix of jazz tunes in a funk style along with Randall’s own music.

Another band Randall is a part of is the Cosmic Lemons. Cosmic Lemons began as an idea brought up between a few of the founding members.

The band performs an array of tunes ranging from jazz, funk, rock and fusion. They cover songs by bands such as Cake, Rage Against the Machine and Snarky Puppy, along with some original music. 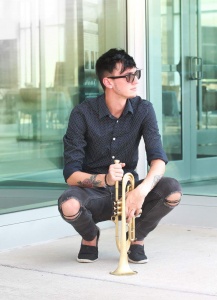 Cosmic Lemons has an EP titled Lift Off released in 2016. The band toured in the summer of 2016 around Ohio, Pennsylvania, New York, Michigan, Indiana and often in Youngstown.

“I was thrown into the mix, and the band blossomed into a very fun and successful group,” said Randall. “We formed in May 2015 and are performing our final show April 1.”

The band will be releasing their full-length album, “Freshly Squeezed,” at their final show April 1, 2017 at Suzie’s Dogs and Drafts downtown.

The third band Randall is a part of is Filthy Foxes, a jazz/funk jam band.

“Filthy Foxes was founded by a buddy of mine, Mike Reardon,” Randall said. “Currently, this group performs at Suzie’s Dogs & Drafts downtown, hosting a weekly jam session Thursday nights from 9 p.m. to midnight.”

Lastly, Randall is a member of The Bees Trees, a funk/rock jazz band that plays a mixture of jazz, roots rock, funk and blues along with some original tunes.

“The Bees Trees is a group founded by my good friend Liam Jones back when we were in high school,” said Randall. “I have been with the band since this past summer.”

The Bees Trees has performed in numerous cities in the eastern United States.

Randall finds passion in playing music. He enjoys having the opportunity to create music for others.

“I enjoy playing music because of how special it is to me and what it means to me,” said Randall. “I’m very fortunate to be a musician and the fact that I get to make music each and every day is what makes life worth living.”

A fun fact about Randall is that he has had the opportunity to perform with Josh Groban live in Pittsburgh.

Randall is a trumpet player, composer, and arranger from Boardman, Ohio. He has recorded two albums with his band Cosmic Lemons, two student albums while at YSU, a single with the band East 9th and his debut jazz album “Prism.”