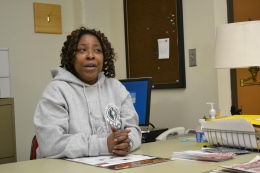 SaTonia Johnson sits in YSU’s office of Africana studies, recalling her struggles and successes as a foster mom. She has worked as a correctional officer and reserve deputy sheriff in Mahoning County, but is most excited about pursuing a degree in criminology. Photo by Kacy Standohar/The Jambar.

Some families have fostered children from abusive or neglected homes, successfully ridding the child’s life of behavioral and developmental problems.

Orphaned and neglected children enter foster care for a second chance on life, but the path to salvation can be riddled with strife.

One Youngstown State University student knows this better than most.

SaTonia Johnson has one biological child, but through the foster system, she has cared for seven children kicking and screaming through life.

And not every story has a happy ending.

“If you think this is a story about kids dressed like an onion in a vegetable play, you can forget it,” said Johnson, a 49-year-old nontraditional student at Youngstown State University.

The Youngstown native lived and worked in Columbus as a youth coordinator and community organizer.

She developed an attachment to children in the neighborhood and began fostering children from troubled homes.

“I was dealing with some really infamous children that I earned respect from. That’s how it spiraled from there,” she said. “They found me. I took one in and another one came.”

Johnson went on to foster more than seven children for five years while living in Columbus from 1992 to 1997.

She returned to Youngstown in 2005 after her mother became ill. Johnson studies criminology and sociology, but often reflects on her time as a foster mother.

She said her fostering experience was anything but glamorous.

“We make sure the parents are suitable pertaining to income, stability and environment,” Armstrong said.

The foster parents are then funded with a monthly boarding check, as well as medical and dental care. Armstrong said 80 percent of children return to their biological families, while 20 percent are put up for adoption.

Johnson, who was raised in a two-parent household, said being a foster parent was humbling and eye opening.

“My mom was the PTA president, and my daddy was my softball coach, so it was very realistic, because when you’re looking from the outside in it’s so easy to judge,” she said. “But once you get in there you realize what people go through.”

She said the young boys were 12 to 16 years old and struggled with behavioral issues along with buying and selling drugs.

“They weren’t going to school. I would go to drop off their lunch and they wouldn’t even be there,” Johnson said. “It was so bad to where I created a summer program that employed them. God blessed me with the right people in my life to create the Youth Crusaders.”

Patricia Stewart, a neighbor of Johnson’s for many years, said she tagged along during neighborhood cleanups.

“She could get through to the kids …  something I couldn’t handle. I would have walked away, but she didn’t,” Stewart said.

“The issue for these kids was survival and money. They were so past school, that they didn’t care,” Johnson said.

She said the boys were desperate to fit in.

“At that time, the gang warfare was spreading like wildfire, and looking from the outside in, somebody would say, ‘Why would these kids do this? And why would they be a part of this?'” Johnson said. “They just wanted to be a part of something.”

Johnson said sharing her faith in God was all she could do for the boys.

“It was so sad. No matter what the outcome was, just to belong is all that mattered,” she said. “You may not agree, but you accepted and you understand there was a method to the madness.”

Johnson said she didn’t receive help from family because they weren’t nearby. The boys’ behavioral problems were often more than she could handle.

“Those kids ran circles over me like 40 going north. I thought I was slicker than a can of oil. But when they got done with me, I didn’t know which way was up,” she said.

Although Johnson never married, she was pregnant with her son in 1997. Eventually, the stress from caring for unruly children caused complications with her pregnancy, forcing her to discontinue fostering.

“It was an adventure God put me on all by myself,” she said.

Johnson tries to maintain a relationship with the boys. She said they call occasionally, but many have families and lives of their own now.

“A couple of them are better, and some are just where they are,” she said.

Attending college while fostering was not possible for Johnson.

“I went to trade schools and received different certifications, but at that time, I was going to the school of hard knocks,” Johnson said.  “There was no room for that.”

If nothing else, Johnson said she hopes she showed the children unconditional love.

“I think that is the main thing I showed them. Good, bad or indifferent, I loved them,” she said.