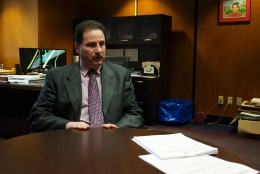 Martin Abraham, dean of the college of Science, Technology, Engineering and Mathematics, supports removal of the foreign language requirement for some STEM programs. Photo by Kevin Alquist/The Jambar.

Some students at Youngstown State University may no longer be required to take foreign language courses.

The Academic Senate ruled in a meeting last week that departments in the YSU College of Science, Technology, Engineering and Mathematics would be able to decide whether the foreign language requirement should be removed.

In a close vote, 31 senators favored the motion, and 27 opposed.

Chet Cooper, chairman of the Academic Senate, said the idea was brought up a few months ago.

“Action was taken in the senate to allow programs that award a B.S. in STEM to choose to remove the requirement from the program,” Cooper said.

Cooper said the physics and astronomy departments have decided to remove the requirement, but the math department kept it.

Nico Minniti, a mechanical engineering student, said he hasn’t taken a foreign language yet, and doesn’t think it’s essential to his degree.

“Even if I took it, I feel like it would be a waste of time,” Minniti said. “I took Spanish in high school, and I don’t remember any of it. Unless I used it every day, it’s not going to do any good.”

As a biology professor, Cooper said the biology department’s proposal is to remove the requirement from its program, but to retain the requirement in the curriculum for Bachelor of Arts degrees.

The revocation of the requirement may not be put into effect in certain departments until fall 2013.

Cooper said this is because each department must evaluate its curriculum before it’s approved.

The decision must be made by the department, then approved by the college and finally presented to the academic standards committee of the Academic Senate.

Martin Abraham, dean of STEM, said the requirement could be double-listed as a program and degree requirement. If it is listed under both, the process could take longer.

Shearle Furnish, dean of the YSU College of Liberal Arts and Social Sciences, urged those in the Academic Senate to vote against the proposal.

“I want to see what’s good for the students pursuing science degrees and any degree,” Furnish said.

The foreign language department is housed in his college, but he said that didn’t play a part in his reasoning.

Abraham agreed with Furnish and said foreign language is important in the journey of greater education. However, he said with the time frame students have to graduate, those credit hours are not essential to their degrees.

“There are a whole lot of things that it would be great for students to learn. The reality is that we have four years to provide an education, and we have to make choices,” Abraham said. “Amongst those choices we make is a determination as to what specific content provides the greatest value to our students.”

Anthony Miaoulis, a junior construction and civil engineering major, grew up speaking English and Greek. He said he believes being bilingual will benefit him in the job market, but understands learning from a textbook is different from growing up with the language.

“Not everyone is naturally good with languages, and it’s a good move [to remove the requirement] because it can affect someone’s GPA,” Miaoulis said.

1 comments Anonymous Tue Nov 27 2012 14:17 It is unfair to assume that just because Foreign Language is no longer a requirement for a major in STEM that the College’s students will have any less job opportunities. If you are not engaged in a language at an early age, your chances for retaining the language is lessened. So by taking a language class in college, your chances for being able to actually put that knowledge to use are very slim. Additionally, the time spent studying to even pass these classes takes away from studying for important major-related classes. As a Biology major, I am very pleased to hear that I will be able to focus more on my core classes and not be troubled with fitting foreign language classes into my curriculum.