Something seemed off in the women’s restrooms around Youngstown State University since the beginning of the fall 2017 semester. A locked and dented feminine hygiene product machine and a new sign caught the wandering eye.

According to the sign, “For your convenience. Menstrual hygiene products (both tampons and pads) are now available in Kilcawley Center’s vending machines for 50 cents each.”

The transition of these feminine hygiene products from behind the women’s bathroom door to the open environment of Kilcawley Center has sparked concerns from female students.

Presley Bowser, a YSU sophomore, said there are good and bad aspects of the new feminine product placement. 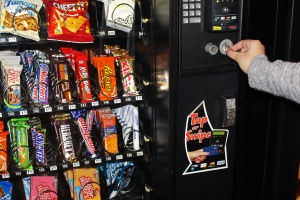 “I think it’s pretty good that [YSU] has made [menstrual hygiene products] a more available option for girls to use, but at the same time I feel like it’s kind of private,” Bowser said. “I don’t think I would want people walking by or seeing me while I was at the vending machine. It would be kind of embarrassing and awkward.”

The invasion of privacy and embarrassment were common concurrent feelings between female students who spoke on the subject.

Brooke Tyson, a student attending YSU, said she doesn’t like the idea of tampons and pads in the vending machine.

“I was just looking for a snack and was shocked to see that stuff in a vending machine I thought was for food. I just thought it didn’t make sense. Being immature, I just laughed honestly,” Tyson said.

She said she is an open person so she wouldn’t care what others thought, but understood why some would be against buying tampons from the machines.

“Everyone knows that if a cute guy was behind you waiting for a snack and you were in front of him getting tampons it might be kind of awkward, whereas in a bathroom it’d be more secure and comfortable,” Tyson said.

Amanda Hovanec, another YSU student, voiced her thoughts on the movement of the feminine hygiene products and being charged for them.

“I think that [the menstrual hygiene product move] is stupid. I think that you shouldn’t have to be charged for tampons,” Hovanec said. “The whole situation is just plain stupid.”

Hovanec agreed with the aforementioned statements, going on to say that it’s embarrassing to buy pads and tampons from vending machines. She also revealed that she once witnessed a man buying tampons, thinking it was a pack of Mentos gum.

“YSU shouldn’t even have moved [the feminine hygiene products] in the first place and we shouldn’t be charged for tampons and pads at all,” Hovanec said.

Attempts were made to find out whose decision it was to move the products, but Kilcawley Center, the YSU maintenance department and the vending machine service denied involvement in the transition from the bathroom to the vending machines.