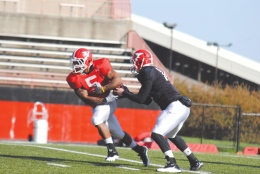 Sophomore quarterback Patrick Angle fakes the handoff to freshman running back Demond Hymes during practice at Stambaugh Stadium. Angle completed six out of seven passes for 70 yards and a touchdown in the first portion of practice on Saturday. Photo by Joe Catullo Jr./The Jambar.

Last year, sophomore wide receiver Christian Bryan walked onto the field at Stambaugh Stadium with butterflies in his stomach as he practiced at the collegiate level for the first time.

“I didn’t know what to expect,” Bryan said on Saturday. “I thought I was going to war in camp because it felt so serious, and it is serious. But when you get out there, you’re just relaxed, you’re calm, and at the end of the day, it’s still football.”

In his second season at Youngstown State University, Bryan, who took three passes into the end zone on Saturday, knows what to expect of himself and of junior quarterback Kurt Hess.

“Kurt’s a really smart player,” Bryan said. “He understands each and every one of us receivers differently. He knows the playbook so well that he feels comfortable with each and every single one of us.”

Head football coach Eric Wolford said in a press conference on Saturday that Bryan and Hess are becoming familiar with each other.

“Those guys are throwing a lot of balls at each other,” Wolford said. “They’ve got some chemistry together.”

On Saturday, the Penguins competed in their second spring scrimmage, the last before Friday’s 40th annual Red-White Spring Game. Wolford said the team is deep into spring practices.

Wolford added that third downs were another focus on Saturday.

“We did a good job early on, on third and one,” Wolford said. “There’s still some missed tackles that I think we’ll be frustrated about. I think we’ve got to continue to find a way to defend the middle of the field a little bit better.”

“Third down is a key down in college football,” Sims said. “If you can win third down, you win the game.”

Defensively, Wolford said the team looked better than in earlier practices, but the secondary — cornerbacks and safeties — still need improvement.

The Penguins are scheduled to practice on Monday and Wednesday before Friday’s game, where Bryan said he wants to put on a show.

“I hope we run up the score on them,” he said. “Not trying to be overconfident or cocky, but that’s what we need to be on offense. We want to score in every single possession we can.”

Sims said he wants to see the team finish by the end of the spring game.