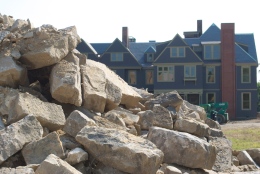 All that remains of the Peck House on Wick Avenue is this pile of rubble. In the background is the Pollock House. Photo by Rachel Lundberg/The Jambar.

A pile of red bricks bakes in the sun on Wick Avenue next to Pollock House. In its place once stood the 125-year-old Peck House.

Prior to Peck House’s demolition on Aug. 16, a committee consisting of community members and Youngstown State University employees met to find a practical use for the 7,660-square-foot home.

Possibilities included the new location for the YSU Office of Veterans Affairs or the English Language Institute. However, in order to do so, YSU would first have to invest at least $1.5 million in renovations.

John Hyden, executive director of facilities, said it was not an effective use of the university’s money to renovate.

“It was a house. We’re a university. People will take issues, but houses are not for universities,” Hyden said. “While we value historic structures around campus, those structures have to compete with the same dollars that fix the roofs.”

YSU gained possession of Peck House in the mid-1990s.

Some in the community, like organizer Phil Kidd, are disappointed with the building’s fate. Defend Youngstown, Kidd’s movement that focuses on promoting grassroots activism and pride in the community, held demonstrations to save the decaying building.

Kidd, who was involved with the committee to find another use for Peck House, said he laments the final decision to demolish.

“I just think that it’s a shame. Because once it goes to the landfill, it’s gone forever,” Kidd said. “We never get that piece of our history back in our community, and this is a city that’s had to do a lot of demolition.”

Though the structure itself was demolished, much of the woodwork, windows, staircases and doors were removed and repurposed by outside vendors for other structures.

Sharon Letson, executive director of Youngstown CityScape, also served on the committee to find a use for Peck House. She said she was disappointed to see the house demolished so soon after the vote.

“I never saw them level a building so fast in all my life,” Letson said.

Hyden said university administrators wanted to demolish the building before classes started, primarily to minimize disruption of parking and traffic on Wick Avenue. He said the administration has ideas for the use of the property, but cannot disclose them at this time.

“I don’t fault this current administration by any means,” Kidd said. “This isn’t placing blame on one particular administration or person or anything like that. That’s not what this is about. This has more to do with a colossal dropping of the ball by the university over a period of time.”

Peck House was one of six historic mansions remaining on Wick Avenue.

The house was built for Dr. George and Emeline Peck in 1887. The last family to live in the house moved out in the 1950s; since then, the structure has, at various times, sat vacant or been used as office space.