The knowledge students can gain outside of the classroom can be just as valuable as what is in the curriculum. The Youngstown State University Film Club aims to prove just that. 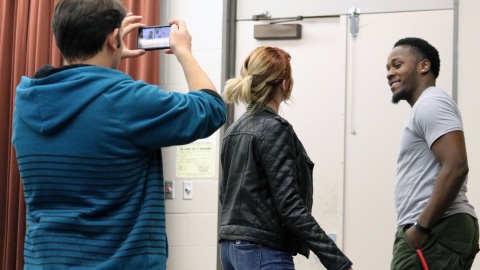 The film club, which began just a few years ago, aspires to not only spread the knowledge of filmmaking, but create full-production films as well. Welcoming students of all majors, the club focuses on every facet of filmmaking from writing, producing and directing, to acting and choreographing.

This year, they are working on creating a short film, along with a web series involving scenes such as a parody skit of a traditional college tour video and their take on the television show “COPS.”

Amy Crawford, an associate professor of telecommunications and adviser for the club, said that the club gives students the opportunity to network and meet other people who are interested in making films, as well as pulling their talents together to hone their passion. She also said that the club creates an outlet for creative ideas that aren’t always explored in the classroom.

“If students have a pet-project or a script that doesn’t fit into coursework or the traditional curriculum, they can find other people who can give them feedback, notes and serve as a crew for filmmaking,” Crawford said. “It also gives students the chance to meet others who are passionate about filmmaking and create work for their resumes.”

The club meets in Bliss Hall’s second-floor audio lab at 4 p.m. on Tuesdays and Bliss Hall’s room 2019 at 4:15 p.m. on Wednesdays. Quincy Carrier, the film club’s vice president, said that he encourages anyone who is interested in joining to contact them even if the group’s meeting times do not fit their schedule, because the club is flexible, and the experience one can gain is invaluable.

“We offer an opportunity to make film with people who love to do the same and love to be part of the process,” Carrier said. “Even if students cannot make the scheduled meeting times, we always do our best to get them involved in the process, because film doesn’t happen in an hour. We do a bit of film study, but it’s normally about getting out there, getting active and starting to produce films.”

The club is lead by Aaron Harris, whose connections through his stepfather, a film industry technician, have created an opening for the club with the Cleveland Film Festival. With this in mind, the group aims to submit their short film to the film festival to add another highlight to their resumes.

“We come in with open, creative minds, and we work together to get the job done, because that’s how it will be in the workforce,” Harris said. “I’ve come into contact with people who not only host the Cleveland Film Festival, but they can get the group involved when we have our piece to bring to the table. It’s a great opportunity.”

Harris also uses the connections he’s made with the Cleveland film scene to fill in the gaps of the group’s learning process. The group plans on taking trips to Cleveland to learn from Harris’s network of filmmakers to tailor their studies toward preparing students for jobs in the industry after graduation.

“They have knowledge that we don’t know about the film field,” Harris said. “That’s what students can gain from this. They can get an inside look at the film industry and learn how they can get a job or learn what they have to be to get a job. It also opens doors for people who are interested in transferring to the film major. With these connections, the students who are interested in helping us can find potential internships in Cleveland.”