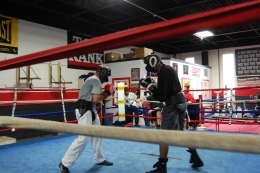 For Edge, a boxing career is a ticket out of Youngstown.

“Youngstown is Youngstown,” Edge said. “It got its negativity, but it got its positive side. … You just make the best out of the situation.”

He said he came to the boxing gym because Loew knows how to make the best of things.

Raised on Youngstown’s South Side and trained by Loew since he was 8 years old, Pavlik became the pride of the city.

He also provided inspiration for many amateur Youngstown boxers who hoped to escape the streets and make a name for themselves.

“We exploded,” Loew said on the effects of Pavlik’s success. “We did get a lot of new kids.”

Almost five years since that championship bout, things have changed.

With a reputation damaged by reported alcohol abuse, Pavlik is no longer the pride of Youngstown. He lost the WBO title in 2010, and then he parted ways with Loew in 2011.

Still, one thing remains constant: The door of Loew’s Southside Boxing Club is always open, and there are always young fighters walking through it.

“I have my gym here, and they walk through the door, just like Pavlik and all my other fighters did,” Loew said. “I don’t go calling around for fighters. … I think it’s just like anything in business. If you put out a good quality, they’ll come to you.”

Originally from Massillon, he joined his brother in Youngstown in 2007, never intending to pursue boxing.

Although he liked the sport as a child, Edge said he never boxed before.

“Has [Youngstown] pulled me into boxing? Yeah, I believe it has because of the environment I live in,” Edge said. “To me, boxing is the best escape route as far as staying out of trouble and keeping my head on straight.”

Similarly, boxing has had the same effect on Lavelle Hadley.

A Springfield, Ill., native, Hadley — unlike Edge — is not new to the sport. Boxing since age 12, Hadley, 22, moved to Youngstown a year ago, and said he wanted to take his boxing career to the next level.

“I heard about Jack Loew and that he had a good gym,” Hadley said.

Where Edge and Hadley are alike is the role boxing plays in their lives.

“Boxing keeps me out of trouble,” Hadley said. “It keeps me positive.”

Boxing has provided support and purpose for Edge, Hadley and many other Youngstown youths.

In a city with a 49.7 percent poverty rate, Loew said he has dealt with “thousands” of hopeful kids and young adults, many coming from brutal backgrounds.

“We’ve had some pretty rough kids that have come through this gym who thought they were rough out on the streets with their buddies,” Loew said. “When they come in here, they get a little humble.”

When talking about Edge and Hadley, Loew describes them both as having “good work habits.”

Located in a city where he can find “a bunch of thugs and punks,” Loew said he values attitude, work ethic and responsibility in his fighters.

“We’ve took some real badasses off the street and done some good work,” Loew said.

“I don’t want troublemakers,” he added. “I’ve had young kids come in here who just started and tell me, ‘Coach, I punched a kid in the mouth today.’ I tell them, ‘Well, I’ll see ya next week.’”

Loew said there isn’t a single troublemaker among the 40 “kids” in his gym.

And he provides more than just a boxing gym. He provides a life opportunity — for free.

“We don’t charge ‘em anything,” Loew said. “And, yeah, it gives them a great opportunity to make something of themselves.”

Hadley, who works part time at a fast food restaurant, said he believes this opportunity can be his way out of Youngstown.

“I think I can make it out of here with boxing,” Hadley said. “With Jack behind me, I can get there.”

Edge and Hadley share the same goal: become a professional and win a championship.

Work on a soccer field behind Stambaugh Stadium should also be started by early summer.

“One of the problems they have with their field is that it slopes,” White said. “You’re always going downhill, and it’s hard for soccer players. They really need something that’s flat.”

This project is budgeted for $1.88 million, and it will also be funded by bonds.

White said these projects are being put out for bids and will be completed over the summer.