After some disappointing finishes during the fall season, the Youngstown State University men’s golf team took a lot of momentum toward the spring season.

The closest YSU had gotten to was a seventh place finish out of nine teams at the Cleveland State Invitational, which isn’t quite good enough for this team.

Having just one senior can hurt a team and it sure didn’t help the Penguins this fall. Luckily for YSU, it came in second place out of six teams at the Titans Motown Collegiate.

“We played well enough to win that tournament and I know that the guys know that for sure,” YSU head coach Tony Joy said. “It just comes down to another team playing better and RMU [Robert Morris University] just played better. We played much better than we have all fall.”

Joy said that its struggles were due to the fact it only has one senior but that doesn’t mean the team can lay down. 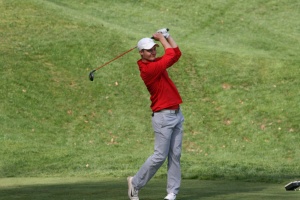 “I’m pleased the way our team played down the last few tournaments. I thought we played much sharper and much better than before. The future is definitely much brighter than it was the last few years for us,” Joy said.

Now, the YSU men’s golf team has a long time off before another tournament. YSU finished up on Oct. 17 and won’t play again until March 9, 2018.

YSU had a two-stroke lead going into the final round of play in its last tournament. Giving up the lead isn’t something Coach Joy worries too much about with this young team.

“I think we definitely could have won but that’s not always how the ball falls,” Joy said. “Rebuilding is tough, but now we have all these winter months to figure things out together. During the year, I don’t really have time to show kids what they need to do better on. There just isn’t time with class and traveling.”

Part of YSU’s bad play also was due to sloppy conditions this fall.

“We played a lot in wet, rainy conditions” is never something a golf coach wants to have to talk about, but Joy said you have to fight through bad conditions sometimes.

“We got to look at teams in our own conference like Oakland and Cleveland State. They are the clear-cut favorites, but we know we have the talent to beat them. It won’t be easy but we are aware of the team we could be,” Joy said.

This YSU team features four true freshmen and one redshirt freshman. With Justin Hallapy as this team’s lone senior, Coach Joy relies a lot on his play leadership.

“Justin is important because we play on course that he has seen before. He can show younger guys what to look for, what to look out for and even just how to prepare. That’s important for me to help guys off the course,” Joy said.

Joy also said that it helps that the team has a lot of really hungry young guys who are willing to put in the work.

“It will be interesting how these freshmen handle the long break they are given,” Joy said. “It’s something they have never experienced and it will just be an interesting time for them. It can be hard to not see real grass for six months in between tourneys.”

Joy also said that having a facility like the WATTS keeps the kids mostly in line because they always have a place to train and figure their games out.

“A lot of these guys haven’t had such a place like the WATTS and I think that will be important to their development,” Joy said. “These guys are winners regardless of this fall’s results. I’m excited for the next season and the winter.”

YSU will start up again on March 9, 2018 at the Jackrabbit Invitational hosted by South Dakota State University in Boulder City, Nev.