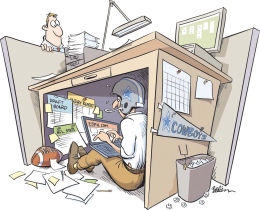 At the beginning of each season, fantasy football participants draft NFL players and score their performance in each game.

Nicholas Bowman, an assistant professor of communication studies at West Virginia University, said that following individual players, as opposed to entire teams, adds another level of competition among fans.

“Sports fan culture dictates that the most knowledgeable fans are the best fans, and one way to show off how much we really know about sports is to win at fantasy sports,” Bowman said.

In Bowman’s collaborative book, “Fantasy Sports and Sports Fandom: Implications for Mass Media Research,” he and his colleagues explore the culture of fantasy sports and its place in modern media. The authors reference a 2009 study conducted by the Fantasy Sports Trade Association, which states that nearly 28 million Americans participate in at least one fantasy sports league.

Chelsea Welch, a Youngstown State University student, is part of the fantasy football hordes; it’s a tradition in her family.

“I got involved through my family,” Welch said. “They’ve played every year since I was little, and I wanted to play. So, in order to do that, I had to know the game of football.”

Welch said the game is an opportunity to bond with her family through the love of their favorite game.

“I love the game of football, so being able to be involved while the season is going is great,” she said. Bowman said the biggest attraction to fantasy leagues is the idea of a deeper immersion into the world of sports.

“It’s an element of being ‘in the know’ more so than we really should be,” Bowman said. “Players get so fixated on their individual fantasy rosters that they start to feel like they know the players.” Bowman said social media opens up an entire world of possibilities.

“In the past, you based your moves solely on the statistics published in major newspapers,” he said.

“Now, we can turn to social media to go far beyond the stats and focus on the player.”

Bowman said dedication to being on top of the latest news motivates fantasy participants.

“I’m in multiple leagues this year,” Welch said. “In my family league, they only allowed my aunt and myself to play. In my other leagues, I’m the only girl. I think the guys tend to look at me the same way as always.”

Though Welch may be the only girl in most of her leagues, she said she takes the game just as seriously.

“Everyone I play with has known me and the love for the game for a long time. So, it’s just a part of who I am, and they know that,” she said.

Even in his extensive research of fantasy sports, Bowman still considers himself to be a dedicated fan who focuses on creating his ideal roster.

“I have this irrational hatred of the New York Giants, so you’ll never see me choosing any of the G-Men for my football roster,” he said.