During a press conference held at the Youngstown Business Incubator on Monday, Barb Ewing, YBI’s COO, was appointed as the next CEO of the company. 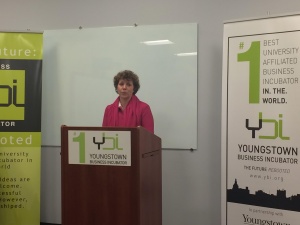 Ewing will replace current CEO, Jim Cossler, beginning on May 1. Cossler said he will still be at YBI as the Huntington Bank entrepreneur in residence, which allows him to work more closely with the Incubator’s portfolio companies.

The transition from Cossler to Ewing has been happening since the beginning of 2016, according to a press release sent by Colleen Kelly, the director of development at YBI.

Jim Yukech, YBI chairperson, said Ewing embraced the challenges the Incubator faced and guided the staff in the right direction.

“It made it a very easy decision to put Barb in this role because she was heading down the path we knew we had to go,” Yukech said.

Ewing said she considers this transition “an evolution, not a revolution,” and wants to continue dispelling disbelief in what Youngstown and YBI can do.

“I am so very honored …,” she said. “Any organization is only as strong as its weakest link, and [I] can say in all sincerity that we [YBI] don’t have one …”

Although he won’t be leading the Incubator into the future, Cossler said he is very confident in Ewing’s abilities as a leader and an innovator.

“… I also believe they think our very best is yet to come. Barb Ewing will confidently lead us there. She is going to take YBI to heights never imagined. I know that,” Cossler said. “And I’m just going to sit back and be her biggest fan.”