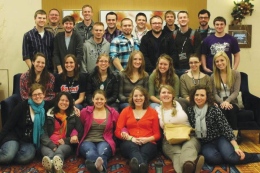 Members of CRU, a YSU Christian organization, are excited to start the semester with their first major event, a worship concert. Co-leaders Nikki Alles and Cory Vaughn hope to host a major event every semester, as well as boost their presence on campus. Photo courtesy of Cory Vaughn.

The Campus Crusade for Christ is taking a leap of faith.

CRU is hosting its first concert for worship at 7 p.m. Friday in Kilcawley Center’s Chestnut Room.

Nikki Alles, one of the leaders of CRU, said group members have been brainstorming an event for a year, and plans for a worship concert fell into place in June. She said it’s been a whirlwind ever since. Alles planned the event with Cory Vaughn, another of CRU’s leaders.

“We really feel like we want to get the whole campus together. Just everyone together to sing and praise,” Alles said.

Vaughn said they got the idea while attending the Alive Festival, a Christian music festival, over the summer.

“We talked with some of the bands who seemed interested, so we thought, ‘Why not? Let’s put something together,’” Vaughn said.

Two musical acts will perform at the free event: Jordan Biel and Circle of One.

Biel is a classic rock worship artist from Cortland, while Circle of One is an indie rock worship band currently on tour and making a stop at YSU just for the CRU worship concert.

Alles said the concert is a way to let students know that CRU exists.

“Almost everyone we talk to has no idea that we have Christian organizations on campus,” Alles said. “So, it’s a way for us to get our name out and let students know we’re available.”

She said CRU’s previous lack of accessibility prevented them from hosting events.

“We’ve been under the radar. So, because we’re so under the radar, we haven’t done big things like this. So, this is a step of faith for us to say, ‘We’re here and we’re willing to do crazy things,’” Alles said.

The event is being funded primarily by CRU members and through the organization’s fundraisers. Alles said members wanted to make the event free so nothing will stand in the way of someone attending.

She encourages everyone to attend who may want questions answered about Christ.

“[It’s] nice to have that way to connect and come and talk and get your questions answered through an organization that’s not going to judge you,” Alles said. “I think it’s so important that students know they have that opportunity to get to know Jesus instead of the rumors.”

The organization would like to host one concert each semester, as well as monthly events.

Vaughn said it’s been a learning experience, as he’s never planned or promoted a concert before.

“It’s really cool to look back and see what we’ve done so far. It has really come together,” he said. “I’m hoping it’ll be a slam dunk, so we can host more events like this.”